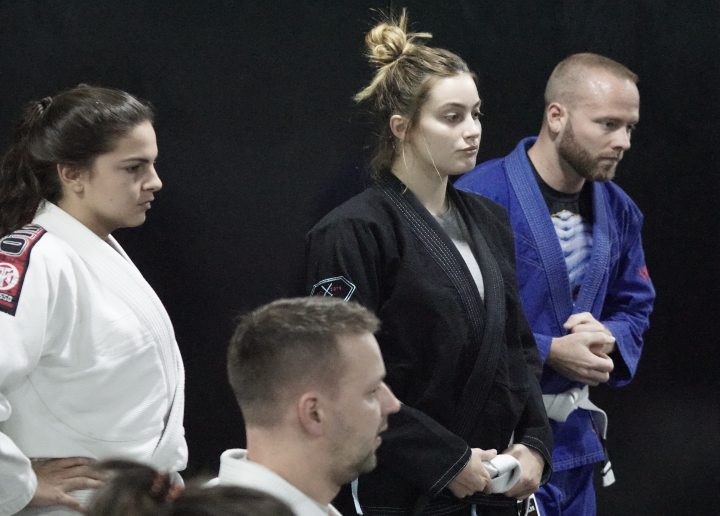 The amount of jokes on Instagram about a new girl showing up at a BJJ gym and 4 stripe white belts wanting to take her under the wing proves one thing – a new cute girl walking in a gym will get attention.

The good thing about BJJ – people are very welcoming and take care of each other. Especially ones who have been training for a while.

Remember the time you showed up for you first BJJ class? You had to find the address, maybe navigate through some corridors(some gyms are very well hidden), find out where to change and had no idea what to expect from the training. Will people be friendly? Or will they try to choke you brutally? It’s stressful.

Now imagine how a girl feels. On top of all the questions you add rolling around on the floor with sweaty men, their hands going all over you – arms, legs, neck and yes – butt and breasts. If you say you’ve never touched girls breasts while rolling – remember the last time you were caught in girls closed guard and tried to posture up. That’s just a part of BJJ.

Experienced girls don’t view it as anything special.. But remember – we’re talking about girls who are just starting their journey.

We can either make girl’s experience amazing or creepy.

In this article I will talk about different BJJ dating experiences I’ve heard from girls, how we can make BJJ even better and…what to do if you actually want to ask that new BJJ girl out.

I’m just a white belt in BJJ. But I’m a dating coach who has helped guys all over the world improve their dating life. I’ve been interviewed in one of the biggest podcasts on dating, given speeches at conferences, etc. I don’t know much about BJJ. But I have helped many guys find what they’re looking for with women – whether it is a serious relationship or simply having some adult fun.

How to mess up girl’s BJJ experience

I’m sure it’s amazing with 90% of partners. But there are exceptions.

I asked around online to find girls opinions and experiences. Some girls had quit other martial arts because they were tired of guys hitting on them. But they found BJJ to be much better. A few girls(with pictures and bios making it clear they were professional MMA fighters) were offended about the idea that girls can’t take care of themselves.

Surprisingly my question received a lot of hate from male BJJ practitioners. Opinions were different. I learned that it’s a very touchy subject to write about. Even some coaches said it’s an important topic but I have to be very careful when touching it.

Several girls sent me PMs telling they started BJJ to be more confident and overcome past trauma.

I received a long story about how BJJ changed her life from a girl who was raped when she was younger.

Jits for one, changed my life – I was raped when I was younger and always had a solid wall against me – I wouldn’t even hug someone.

When I went to Jits it was tough mentally but also made me feel so flippen free from all the negativity I had against men.

I had 2 awkward encounters, I was rolling with a partner (been rolling forever) and he suddenly had to go to the bathroom, it was all good, he was there for some time, he came out and then left – I was like WTF? To this day (1.5 years) he has never rolled with me and we both kinda know what happened lol.

Second time, I had a guy in guard and he stood up to break it, but I have pretty strong legs and he jumped up and down trying to break it – eventually we both at the same time just said ‘this is fucked up’, laughed it off and continued rolling.

The great thing is neither of these things have put a bitter taste in mouth, considering what happened and that is the magic of Jits. It heals, and makes you grow up – but! We openly speak about these things and that sometimes it can go wrong, that the important thing is to openly talk about it – not who did what but what can happen.

To date I can give you countless WTF moments but these two were the biggest laughs for me.

I have had a rolling partner who put his hand up my shirt – this was not on, I didn’t appreciate this and he did it more than once. This was a total break of trust which Jits has helped me build. So I have actively decided to not roll with him.

Another case of guys who think you hot because you do Jits, it’s not on – there is more to me, but I understand that it might be a turn on, but something guys should learn to appreciate rather than try to take advantage of.

From all the stories I received this one surprised me the most. The guy was intentionally being inappropriate. It could have been an accident. And just to make sure I asked “What do you mean by ‘put his hands up your shirt?’ You mean during the rolling? And by shirt you mean rash guard?”

I don’t train in rash guards, I use tight vests or T-shirts unless I’m in a comp – they just a lot cooler.

He would put his hands under the shirt and try feel me up, I’d then just quickly tap and try to ignore it.

Yeah the hands on breasts things happen often – but I can tell it’s unintentional and hey – we are doing Jits after all. I’ve often put my hands in places accidentally but it happens.

This particular incident was intended, and he did it often and I should say something but I didn’t want to make things even more awkward.

Now we just don’t roll ever. Which is really not so great because he was really good and could have learnt a lot from him.

For me, I’d love to shout and say ‘Hey! I’m here to heal, help me’. But I think in most cases men don’t always see this – because it is not top of mind that these girls have been through something.

Most of the girls I roll with in my club have been through something similar in terms of sexual abuse and find that Jits has helped them, but it’s a long process and things like this (hands in shirt), slow it way down.

Another story was from a girl who showed up on a new gym and after rolling with a black belt was instantly warned to “expect him in your DMs”.

The DMs never happened.. But a lot of “too much grabbing” during rolling did. This girl was brave enough to go talk to the gym owner who took care of it instantly. Since the fb post where I asked girls to share their experiences was later deleted by group admins(I didn’t know only BJJ travel related questions were allowed in the group) I never found out how exactly he took care of it.

Is it always so bad?

Of course not. There are plenty of amazing couples who met on the mats.

When training in Kimura Academy in Belgrade, Serbia I noticed a couple who would roll hardcore, do the nastiest leg locks on each other and as soon the roll was over – hug & kiss. It was the most beautiful thing I’ve seen on the mats(except watching a visiting black belt toying with a purple belt who toyed with me just a few days ago).

Nikola(Nikola Pavlovic) was a blue belt when Ivana (Ivana Pavlovic) started training. Since she didn’t have many people to roll with coach suggested she rolls with Nikola. Both said they had an instant spark and a thing for each other from the first time they met. But Nikola didn’t do anything in the beginning. At least not on the mats.

Some of the guys go out for drinks after last Friday’s class and he invited Ivana to join. It was very subtle and polite. No inappropriate DMs. Once they got to the bar, they hit off a good conversations and it was smooth sailing since then.

They’ve been married for a year now. Nikola is a purple belt coaching leg locks. Ivana is a blue belt. And they even have mats at home to drill stuff they watch on BJJ DVDs.

At the same time, when I asked about it, Ivana said she received regular DMs from other guys she was training with. Her solution? To simply straight up politely tell them not to DM her again.

But what to do if you really can’t take your eyes off that new girl you’re training with?

Of course there are some ways you can “make your move” on a girl you’re training with. And there is one simple rule to be sure you don’t become the “Expect him in your DMs” guy.

If she likes you, she will likely react positively to a small attempt you make. Anything – having a chat, following her on Instagram, liking a few of her pics after she follows you back, inviting her out, etc.

In other cases girl not being into you means you have to do some more work. But not when you’re hitting on someone at work, university or your local BJJ gym. If you don’t want to make things awkward in these places – follow a simple rule.

Basically. If she doesn’t react very positively – do not continue.

Of course there are exceptions. There have been plenty of cases where guys have “worked” to get a girl they’re training with out for drinks. But BJJ isn’t the place to show how good your “game” is.

If it’s good – use it somewhere else. If it isn’t not – you risk quickly becoming “Expect him in your DMs” guy.

If you try, sleep with her and break up after a while – you still have to train together. It will be awkward

If you try and get rejected – you still have to train together. It will be awkward

If you try and it works out – amazing. Congrats!

But where to meet girls if you can’t hit on your BJJ training partners?

Guys who train hardcore are in the gym most evenings. Not much time for social life. They don’t go drinking and clubbing too often. Where can they meet girls?

I am a dating coach and I help guys who are tired of dating average girls from work, friends and online dating to learn to meet girls they like anywhere. Simply walk up to them and get to know them. I share the best ways to start conversations and meet amazing girls on my YouTube channel, podcast and website – http://strobert.blog/

There are 4 places you shouldn’t meet girls at:

But it’s way beyond the scope of this article.

St. Robert is a dating coach who has helped guys from all over the world(USA, Canada, Australia, Germany, Belgium, Spain, Israel, Switzerland, Hong Kong and others) learn to date girls they really like.

He has been interviewed in one of the world’s largest podcasts on dating, given talks at conferences.

Instead of teaching you stupid Tinder pick-up lines he teaches exact things you can use to take control of your dating life and start meeting girls anywhere – streets, shops, cafes, gyms, elevators, tennis courts, etc.