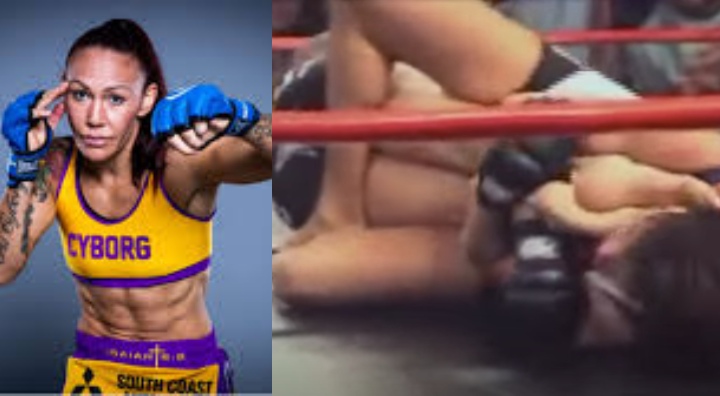 Cyborg has been training BJJ and grappling for close to 16 years. Cris was a world purple belt champion a few years ago.
Early in her career, she also competed on Wrestling back in Brazil.
In a Wrestling competition back in 2007, she faced world class wrestler Aline da Silva (world wrestling silver medalsit) and beat her.

What is surprising is that Cris Cyborg’s first MMA fight was a submission and by an extremely rare double kneebar submission.

“Cyborg”, made her professional debut in mixed martial arts at the age of 19 on May 17, 2005 at Showfight 2 against multiple time world BJJ champion Erica Paes.

Paes, who was five years her senior, was the first woman to train at the legendary Brazilian Top Team academy, a rival gym of the Chute Boxe gym where Cyborg trained.

Cyborg lost the fight via submission in the first round, which remained her only professional loss in MMA until 2018, when she lost for the second time in her career against Amanda Nunes.

Incredibly, Paes submitted the tough Cyborg with a double kneebar where both legs are trapped. Cyborg tapped in pain. Cyborg’s team claims that she tapped out due to an elbow injury sustained after a fall in the fight.

So is the double kneebar a legit move? Not really as it’s low percentage but when it’s applied by a BJJ world champion then it can work for sure.

Here is one way that should work when setting it up from a guard pass:

This video which is a grappling satire, shows how to set it up: