Cormier: “Khabib Chose Triangle Because He didn’t Want to Hurt Gaethje in Front of Parents” 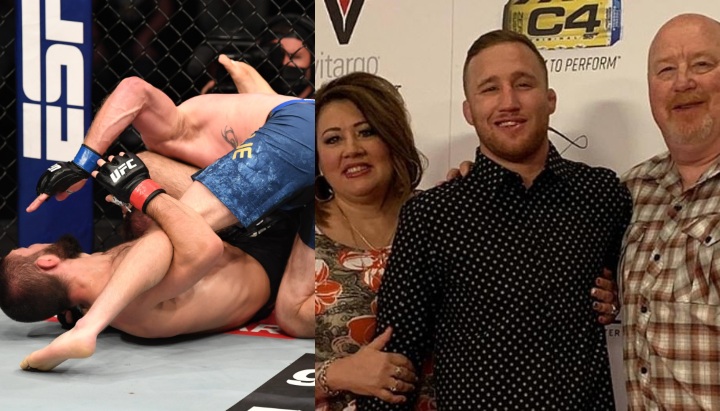 He promised his mother that he would not longer fight without late father Abdulmanap by his side.

There was mutual respect between Justin Gaethje and Khabib so that is the main reason that the Dagestani fighter chose to finish the American with a triangle choke instead of his trademark ground and pound.

But according to close teammate Daniel Cormier, there was also another reason. He revealed the conversation he had with Khabib regarding the submission:

“So when he got there, he was gonna do the armbar. But he had heard Justin all week saying he would never tap. And he didn’t want to hurt him in front of his parents. So he went to the triangle and just put him to sleep.

“He goes, ‘I didn’t want to hurt him in front of his parents, so I said I’m gonna go and put him in a triangle, and then if he goes to sleep, you go to sleep, you wake up, you’re fine,’”

He also chose a choke instead of an armlock because he didn’t want to break Gaethje’s arm:

“To be comfortable enough to think about this in the moment… that’s crazy,” he said. “He didn’t want to break his arm. Because if Justin’s not gonna tap, you have to break it. And he didn’t want to do that in front of his mom and dad.”

How To Set Up The Mounted Triangle Choke Like Khabib

You need to hear the reason @TeamKhabib switched from the armbar to a triangle against Justin Gaethje at #UFC254 🤯 (via @dc_mma) pic.twitter.com/jjCXgm3r3e