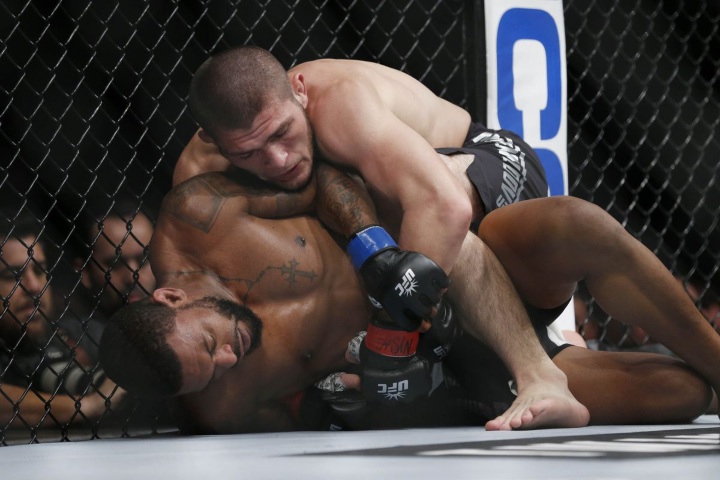 Controlling your opponents in BJJ can be tough, especially in No Gi because of the lack of control due to the slippery rashguards. This gets even tougher if you need to do so when they turtle up; it is just so easy to slip off of them, and to end up in a bad position!
There’s an alternative to it, though – a Dagestani one. Kam Atakuru, one of the best grapplers coming from North of England, demonstrates the Handcuff Hammer Lock which Khabib Nurmagomedov himself is famous for using.

Kam first points out that you definitely shouldn’t establish the seatbelt grip. If you do so, there’s a high chance that your opponent will be able to simply post on all fours, drop to their knees, circle to the side and get a Single Leg on you.
Secondly, once you do go on with using the Handcuff Hammer Lock and you start transitioning to the side in order to bring your opponent down, don’t lean over their shoulder, as this will make it easier for them to break your grips. In order to see what you should do instead, keep on reading below.

SETTING UP THE HANDCUFF HAMMER LOCK

What you should do is that you should establish a bodylock grip. Kam emphasizes that you shouldn’t squeeze too tight, so that you can follow your opponent if they decide to get rid off your grip by trying to set out. In other words, this sort of a grip will enable you to follow them around in almost any way they decide to move; plus, you will be able to switch sides.
It is equally important to stay on the corner to their hip, which will make it easier for you to stay attached to them throughout the movement.
From here, you’ll be looking to break your opponent down. In this demonstration, Kam’s training partner decides to stand up to his feet – which frequently makes up for confusion on the grappler’s behalf, says Kam, because they don’t know what they should do once their opponent posts up like this!

Therefore, Kam demonstrates that in this situation you should first get your arms a bit lower, so that they aren’t close to your opponent’s armpits. Then, use one of your shoulders to place pressure on your opponent’s shoulder blade. Again, don’t lean over their shoulder.
After doing so, move to the side you are placing your shoulder pressure at and use your elbow to pull your opponent down towards you, which will bring them to the ground.

Once on the ground, your opponents might try to get back to their knees in order to turtle-up yet again. To counter this, Kam shows that you need to grab the arm which is closer to you, at the wrist, and then pull it in towards you while driving into them with your bodyweight.
This will flatten them out even more, and you need to apply pressure over their shoulder with your torso, which will make it difficult for them to move.

From then on out, you want to trap your opponent’s lower leg – you do this by first sliding your arm to that leg’s hip and driving it back, after which you step over that leg and establish an S-Mount over their quadricep muscle.
To end the setup, establish a Lockdown onto their leg and continue applying shoulder pressure onto their shoulder blade. From there, you have loads of submissions and transitions that you can do at your disposal!

Kam demonstrates the Handcuff Hammer Lock on the video below: