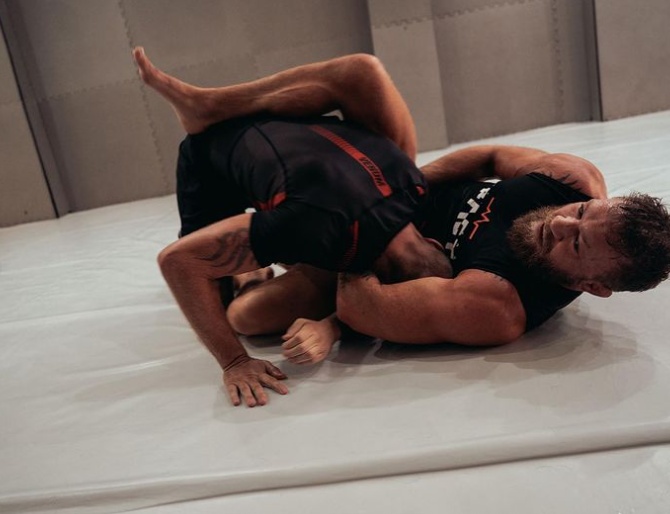 Conor McGregor, currently a BJJ brown belt, has competed multiple times Gi and No Gi in international BJJ competitions (IBJJF Europeans, London No Gi Open) and has had decent results.

Many MMA fans have been critical of Conor’s ground game since we rarely see it and he has been submitted 4 times already in MMA.

McGregor has said this about Jiu-Jitsu:

This moment was survived.
The arm was kept locked out straight as pictured, allowing the absolute smallest pocket of air in as possible. The blood will still supply to the brain and you stay breathing.
If i move to side control here, the force of the strangle shifts to either side of the neck blocking the carotid arteries and crushing the trachea , stopping the blood supply to the brain and you are then dead.
Jiu Jitsu is not designed to hurt you. It is designed to kill you.
It is a mad game.
You pay me multiple millions of dollars for this.

McGregor is currently on the Spanish island of Mallorca, McGregor decided to get himself a training session and showed up one morning to the No Gi BJJ class at Mallorca BJJ. The students were in shock when they saw the Irishman show up and training with them.

“We were getting ready to start our No Gi BJJ class when all of a sudden, Conor walked in. He was a very nice guy, humble and did the class like everyone else. We did the warm up and then went straight to rolling. ”

“Conor has very good Jiu-Jitsu. Very technical and very strong. In my opinion, he is at black belt level.”

“My guys and myself of course were careful not to injure him.”