Competitor Turtles Up & Submits Seven Opponents In a Row 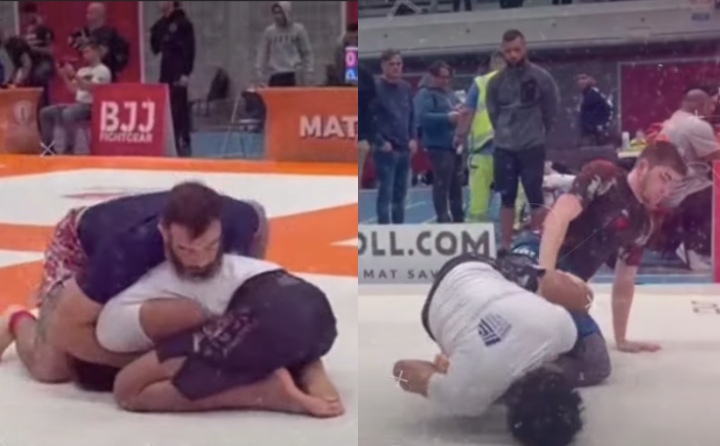 In Jiu-Jitsu it is easy to think you’ve seen it all, but back in late 2021 at the Amsterdam Grappling
industries tournament, something spectacular occurred. A previously unknown athlete by the
name of Raoul Audhoe was repeatedly seen initiating what seemed to be poorly executed double
leg takedowns. The takedowns were so slow that the athlete always ended up in a turtle position
openly offering his back to his opponents. Some of them even started laughing as they began to
exploit the evident shortcomings of their submissive opponent.

However, there is a saying in Jiu-Jitsu: “If it seems to good to be true, it probably is” or rather, if
someone gives away their back so easily, they are either extremely inexperienced or you are being
set up for a nasty surprise.

As time passed, what started out as random attempts to try to insert hooks, cross-facing, sinking
in guillotine chokes or at least try to score a point to secure the victory became frenetical.
However, nothing seemed to be working and all of them failed miserably. Because in seven
consecutive fights, not a single point was scored. But wait, there is more, because what
happened next was incredible.

Check out his performance:

In general, the Turtle position is supposed to be a defensive position where you stay briefly to
either sweep or transition to some form of guard retention. But it’s definitely not considered to be
an attacking position. Yet, Raoul systematically managed to submit not one, but ALL of his
opponents – Attacking From Turtle.

Was it a lucky shot? No, submitting seven opponents in a row was not a random coincidence,
because Raoul Audhoe, who is a brown belt under Master Priit Mihkelson is no stranger to the
Turtle game. Namely, for the last couple of years, Raoul have focused on learning from
Mihkelson’s work, and in a time of a pandemic this tournament was the first possibility to finally
battle-test the true effectiveness of this unorthodox position.

As a bystander the idea of giving away your back might not appeal to everyone. Actually giving
away your back probably doesn’t appeal to anyone who is not a turtle specialist. Yet, if you dive
deeper, there are some elements of the turtle that are profoundly useful in one of Jiu-Jitsu’s most
important areas such as how to defend your back.

After all, nature has only provided us with the ability to defend against threats that come from the
front using our arms and legs to kick and punch, grab, push and pull. But unfortunately, when
dealing with attacks from behind we are exceptionally limited in our abilities to defend ourselves.
This also explains why taking the back is the most preferred position in BJJ. However, after
watching Raoul Audhoe’s performance, this could also be a sign that Jiu-Jitsu is evolving in a new
direction.

In an interview, Raoul makes sure to point out that he is “not giving away his back, but rather
turning his back” which is quite different since he is using movement and hand fighting to
completely deny his opponents the ability to control anything at all.
Denying the opponent the ability to engage when in turtle sounds complicated, but telling by his
stunning performance, it sure seems like his systematic approach to the turtle truly is working and
if it works for him then chances are it will work for others as well.

Think about it… Having a clear path to follow, knowing that very few people are going to be able
to take and attack your back gives you time not only to stay safe, but also to plan and execute
your own attacks. In this case all seven consecutive finishes came from leg locks, but there are
many other submission options at your disposal such as omoplatas, armbars, kimuras…etc.
In conclusion: Being able to confidently defend your back is an extremely powerful skill. Being
able to generate offense and get submissions from your back gives you the element of surprise. If
you learn how to combine the two, your Jiu-Jitsu will be highly unorthodox and unpredictable
because nobody expects you to be attacking from turtle.

Learn to Attack From Turtle

Say Goodbye to getting submitted from your back because you’re about to get a new A-GAME! 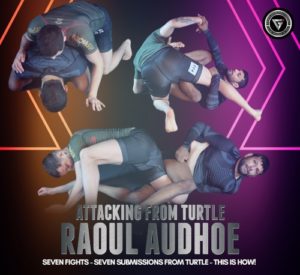 Please be advised, you are always training on your own behalf and at your own risk. Be wise and keep both yourself and your partners safe at all times! Now get out there and Submit everyone from the Turtle! OSS!