Charles Oliveira vs. Islam Makhachev – Who Is the Better Grappler? 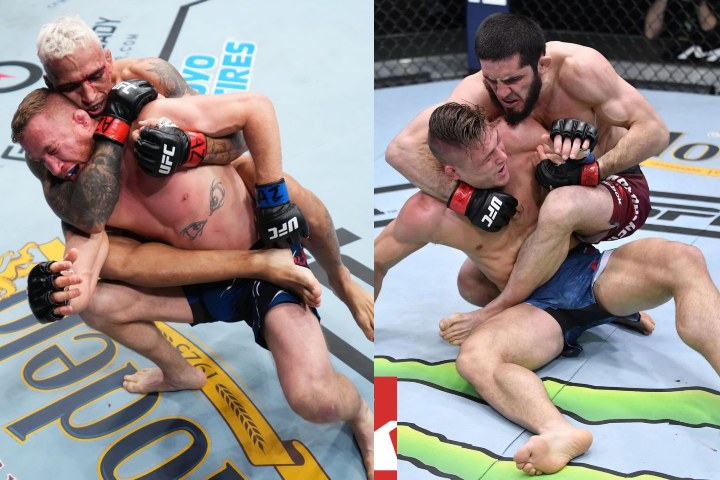 On October 22nd, two of the best lightweight fighters in the UFC will face off to determine the new UFC lightweight champion. UFC 280 will be held in the Etihad Arena, Abu Dhabi, and the main event will be a title fight between Charles Oliveira and Islam Makhachev. Both fighters are outstanding grapplers, and most of their victories come from submissions. In this article, we will compare these two athletes and try to answer the question – who is the better grappler?

Who Has the Wrestling Advantage?

In the past, both athletes have shown excellent wrestling skills that helped them put their opponents on the ground. Charles has demonstrated great wrestling in his match against Tony Ferguson, which relies heavily on bodylock takedowns and getting behind an opponent. On the other hand, Islam Makhachev is a different animal when it comes to standing grappling. He comes from the Dagestan wrestling school, and his takedowns are elite. Whether he shoots for single and double legs or works from the clinch, he is nothing less than world-class. If we look at the UFC statistics, Islam averages more takedowns per 15 minutes than Charles, has much better takedown accuracy and has significantly better takedown defense. There is no doubt that Islam Makhachev will have an advantage in wrestling.

Who Has Better Submission Skills?

Submissions are a weapon both Charles Oliveira and Islam Makhachev have used in their previous matches. Islam Makhachev has 10 submission wins in his career, and Charles Oliveira has a total of 21 submission wins. Islam Makhachev has mainly used submissions such as kimura, arm triangle, and the rear naked choke. He likes to work from the top position and avoids being on the bottom, as seen in his match against Arman Tsarukyan. On the other hand, Charles Oliveira has used a variety of submissions throughout his career, and he can use them from any position. He is known for his guillotine and anaconda chokes, which he throws when someone tries to take him down. Additionally, he has excellent back control and can finish the match quickly with a rear naked choke. This part of the match will favor Charles Oliveira, as he has much more ways to threaten Islam than Islam has to threaten him. Since he is a solid guard player, he can also attack with submissions from the bottom, such as triangle chokes.

Although many matches between grapplers end up striking because both athletes want to avoid the ground, I believe this fight will have great exchanges on the canvas. Choosing the winner will be difficult, as these are probably two of the best grapplers in the division. However, I believe Islam Makhachev has a more straightforward path to victory. If Islam can get the top position and tire out Charles, he will be able to win (similar to the Davi Ramos match). On the other hand, if Charles can exploit Islam’s mistakes and get to his back or attack with guillotines, he will easily submit him. Thank you for reading, and enjoy UFC 280!

My name is Milos; I am a brown belt and head coach of Fort Jiu-Jitsu! Check us out!