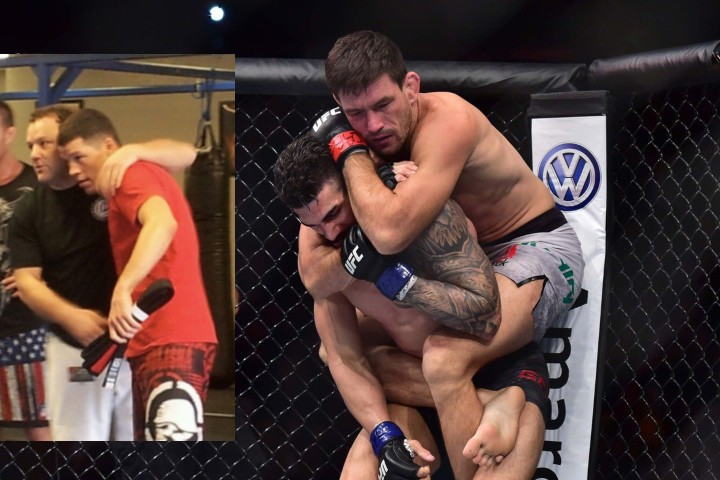 With a career in MMA of close to 20 years, 14 of them at the UFC, the 43 year old Demian Maia knows he is in the final stretch of his career and, his latest fight in the octagon, he lost a decision to Belal Muhammad.

This was actually the final fight on his current contract with the UFC. This made, UFC president Dana White say that this would be Maia’s final fight for the promotion but the Jiu-Jitsu legend is asking for another opportunity.

Maia even has an opponent in mind for his retirement fight:

“Last night I tried hard and unfortunately wasn’t able to put my best performance,” Maia wrote on Instagram. “As frustrated as I am, I kept trying until the end and that’s in the past now. I’m already looking forward as I know time goes by fast, and I won’t be doing this much longer.

“Nate Diaz, I saw your quote on the press conference, and think you’re great too. You’re a great fighter who also represents jiu-jitsu and you’re real, I respect that. Regardless of last night, I know I still have one fight left in me, and it’s no secret that I feel like UFC is my home, where I want to finish my career.”

“Now, I have no idea if they will give me another fight, but if they do, I would be honored to do my last MMA bout with you, someone who always come to fight, who represents [Brazilian jiu-jitsu] and whom I respect,” Maia said when addressing Diaz.

“I have had a long career, fought pretty much everybody, and proudly represented jiu-jitsu the best I could. If I have one more, I don’t want to waste it with someone who I don’t respect. So If you want it, and the UFC want to do it, it will happen, and it will be my last dance. Much respect.”

Diaz fought at UFC 263 where he lost a decision to Leon Edwards.

This could be an interesting fight. Both are high level Jiu-Jitsu fighters however Diaz would have the advantage in the striking area.

Diaz’s longtime coach Cesar Gracie, however, doesn’t like the idea.

“I know there has been speculation on whether Nate will accept the fight with Demian Maia,” Gracie wrote in a message to MMA Fighting. “Although I have not yet talked to Nate about his thoughts on this fight, I can tell you that I am completely against the idea. Demian has been a great representative of Brazilian jiu-jitsu on the mat and in MMA. He has accomplished much and we all respect him. He is still a dangerous opponent but I don’t feel Nate has anything to gain from this fight.

Gracie was actually surprised by the callout:

“We have actually reached out to someone close to Demian to set up some training with him and Nick Diaz,” Gracie wrote. “Nick and I discussed this as we watched Demian’s last fight. We thought it would benefit them both. I was surprised when Demian came out with his statement to fight Nate but I am still open to him training with us.”

“I would think the trilogy versus [Conor] McGregor,” he said. “I know that Nate wants tough fights. He is motivated by fighting the best guys.”

In an interview with TATAME, Maia stated that he intends to compete in Jiu-Jitsu again once he retires from MMA. What are the events where he would like to participate:

“I know all these events, the BJJ Stars and the BJJBET, I know all the organizers. Fepa Lopes (organizer of BJJ Stars) is a friend of many years. The first time I fought in a professional Jiu-Jitsu event was the Black Belt 1 Challenge, which was the first event that Fepa did in my professional life and I was able to fight.

There’s a lot of cool things happening in Brazil in relation to Jiu-Jitsu and I’ve had invitations from all these organizations, both in Brazil and abroad. But when you’re inside an event, and when it’s the biggest fight event in the world, it’s very difficult to focus and change your training, because when you’re going to compete in Jiu-Jitsu, it’s another type of training and preparation. And I don’t have this ‘luxury’ of separating time, because the UFC can mark a much more important fight for me, and I would have to change everything again. I take very seriously the way I’m going in, how my performance is going to be, so I don’t come in just for the money and to enjoy it, I want to go in being well trained and ready for that specifically. But, for sure, Jiu-Jitsu fans can expect me to compete in BJJ in the near future.”