Cauliflower ears in Jiu-Jitsu. What causes them, how to prevent and treat them 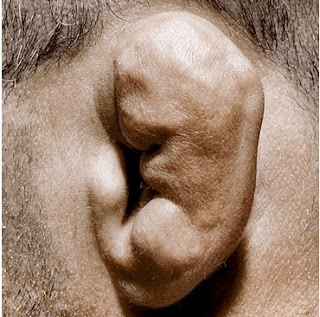 This article was sourced from a few articles notably from http://www.grapplearts.com/index.php and a few forum posts on sherdog. I also added my story as I’m also a cauliflower guy 🙂

Chances are that if you practice Brazilian jiu-jitsu, you know someone whose ears look like a tortellini. Cauliflower ear is caused when the ear receives a blow that shears away the ear’s cartilage from its overlying perichondrium. Liquid fills the new space between the two layers, and will harden into a hard fibrous lump if not drained.

What are the reasons to avoid cauliflower ears? Here’s a brief list.

Reason 1: You may scare away a potential girlfriend, boyfriend, or employer. I think guys have a little less to worry about here as having the appearance of a “tough guy” may be attractive to some women. I don’t think any guy ever would appreciate his girlfriend having cauliflower ears though as most would agree that cauliflower ears never qualify as “pretty”. In very few cases will having cauliflower ears help you get a job, especially in a white collar setting.

Reason 2: It may be harder to hear! I am no audiologist, but I think we can safely say that your ear hole’s original diameter is intentional and probably optimized for good hearing. Making it smaller or obstructed is likely to negatively impact one of your five precious senses.

Reason 3: There is no way to put your ipod earphones in your ears! This is the scariest of all outcomes as it may prevent you from being able to listen to your favorite BJJ podcasts. Robson Moura told the story of when he was warming up at a tournament once he borrowed his friend’s ipod. When the earbuds immediately fell out of his ears he originally thought it was because there was something wrong with the earbuds. After they fell out the third time he realized his own banged up ears were causing him to not be able to listen to the ipod, not the earbuds.

Where does that leave us? Well the best way to prevent cauliflower ears is to wear protective headgear. Honestly these are not the most comfortable things in the world, nor are they a recipe for high fashion. However as I have a friend who trains with me who is a doctor and wears headgear I feel empowered to make the statement “prevention is the best medicine”.

If your ear just filled up with liquid after getting scrunched like origami during BJJ training, you may have some luck if you drain the liquid. Doctors can do this for you and there are plenty of postings on forums showing where people drain their ears on their own. Ouch.

If you have had cauliflower ear for a long time and it’s become marble-hard, you can get plastic surgery to repair the damage. That’s expensive. If you’re on a budget and want to negate undesirable cosmetic effects of cauliflower ear, you can grow your hair long so it hangs over your ears, or buy a funny hat that draws attention away from your ears.

My personal story with cauliflower ears:

I started getting cauliflower ears after about 9 months of training BJJ. I was on holiday,training in Brazil and was sparring against a heavyweight competition blue belt. We were on the ground, and he hit me with a knee to the right ear and my ear began to immediately swell up like a balloon.

At this point, I didn’t know what to do, so my instructor went with me to the pharmacy and we bought some insulin needles, alcohol, and cotton. The pharmacist gave us a funny look (maybe she thought that I was a junkie) but I proudly showed her my exploded ear and told her with a dumb donkey smile and a french accent “Orelha de Jiu-Jitsu” and she laughed. My coach was a great help. He already had experience with this situation and offered to drain my ear for me. I could have gone to a doctor, but that would mean that I would have to rest at least a week without Jiu-Jitsu and that was out of the question as I was in Brazil to train…

He cleaned, disinfected and drained the ear, and it looked normal again. The next day, however, it swelled up again and my coach was busy and so I cleared it myself. It was a piece of cake.

I went and bought myself some headgear and started training again. The headgear I bought wasn’t that good as it was rubbing my ear, and each time someone tried to choke me, they brush up on my ear. Needless to say my ear looked even worse and it was spreading! For the next few days I was draining my ear everyday. It really became a routine. After a few months, the top half of my ear was cauliflowered and the rest was normal.

Over the next few year, the cauliflower spread on my ears like a bad weed. It would usually start swelling when I was training very hard, like for a competition for example. I now have both ears completely cauliflowered! I don’t feel that it has affected my social or love life. On the contrary it gives you something to talk about. When I was working in Real Estate, most of my clients were French, English, Irish, all big Rugby nations so everybody knew how one gets ears like that! It would make them immediately at ease and we would have a nice conversation. With women, it never hindered me either. I would just explain how ears get like that and they would find it really cool (most of them at least lol). I think that it’s all in the head. If you think it looks ugly, you will never feel comfortable with them and will be self conscious. For me, they are the result of years of hard training and they are now a part of me and I wouldn’t want to change them. My wife finds them cute too 🙂

Get larger bore needles if you can – insulin needles are a bit small
Really wash your ear well before trying this, then coat the whole ear with polysporin b4 sticking yourself
Draining the ear once a day is probably plenty. If you do it too often you will cause a lot of damage, which will cause more bleeding, which will cause more swelling.
Try to initiate draining asap after injury. The fluid coagulates after 2 or 3 days, and this thicker fluid doesn’t come out very well at all. It also starts necrotizing the surrounding cartilege.
Try to keep pressure applied to the ear throughout the day. I have used a headband (which didn’t work very well) and a really bizarre paperclip and shaped cardboard contraption which worked well.
It seems that some people are more susceptible to cauliflowering than others. I never had a problem with my ears until my third or fourth year of BJJ (and that was after years of Judo), but then something changed and I had to start being a lot more careful.
Of course it is better to have a professional do this, but not every doctor knows what he is doing here. If you can find a doctor who specializes in wrestlers or rugby players you are in luck!