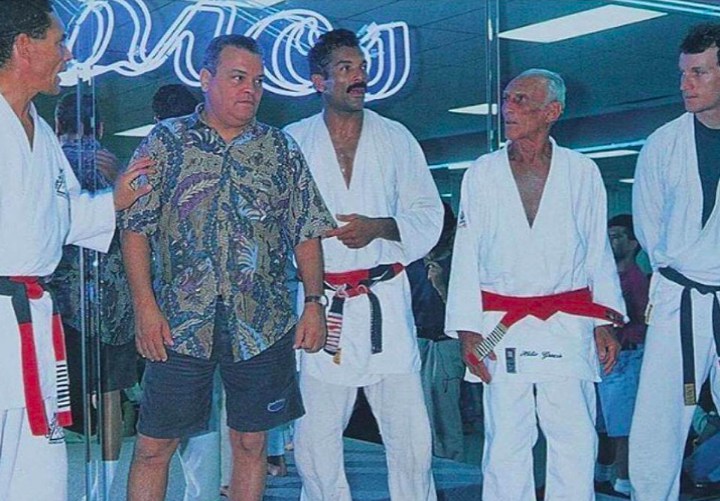 Grandmaster Carlson Gracie, Sr was the eldest son of Carlos Gracie, founder of Gracie Jiu Jitsu with his uncle Hélio Gracie, and learned the art from his uncle and his father.

Always a very colorful, honest and outspoken figure, here is a collection of various quotes from the Grandmaster:

“Jiu-jitsu is all one thing; it is all the same, however I am a very dedicated and studious person. I am always inventing new positions, evolving old ones. I research positions and with repetition and observation I improve on them. Because everything in the world changes and progresses, so I try to do that with jiu-jitsu.”

“If it were not for me, the Gracies would be selling Bananas in Largo do Machado!”

“”If you can not win, make the enemy pay a steep price for victory”

“There is no reward without sacrifice.”

“My father was teaching on top of my mistakes. From there I developed a lot. When I wanted to learn something, I never forgot. Have a good memory, had the advantage. He was very persistent, as my father. I researched the positions, inventing a way out of them. Invented so many blows. ”

“You know a thousand moves and you suck at every one of them.”

“Punch a black belt in the face, he becomes a brown belt. Punch him again, purple…”

“‘I am your friend, but in the ring we are enemies and I am going to beat you to a pulp!”- Carlson’s statement to Santana after the Helio fight.

“There is no losing in jiu jitsu. You either win or you learn.”

“Life is yours, do not let life’s problems have other influences on what you believe. See for yourself.”

“You should be a missile and go and destroy your opponent.”

“Never quit, you have to resist to the utmost. ‘Til you drop, like a Samurai”

“My Jiu-Jitsu is completely different from theirs (The rest of the Gracie family), my technique has nothing to do with “Gracie Jiu-Jitsu.” I AM CARLSON GRACIE and that’s the way it is in the ring. Who ever shows up on the way in, is going to have to fight against my fighters.”

“The best way to get a move to work is to make it so uncomfortable that the opponent gives it to you to stop the pain.”

“If you want to be a lion, you must train with lions”

About his relationship with his uncle Helio Gracie:

“I have nothing against him, the only problem is that he’s going around telling lies, you know what I mean? He goes around saying that his sons are the biggest & best fighters in the world and that they discovered the invincibility. His students lose everything here in Brazil. OK, Royce did well in the U.S. He beat everyone there, but no one knew anything then. Here in Brazil, I’ve never seen Royce win ONE championship. He lost to everyone. He lost to De La Riva, who was so much smaller than him. He tapped out to Paschoal. He’s a good fighter, but never won anything here. He’s not this “phenomenon” that they talk about.”

“The problem with him is that he trademarked the name “Gracie Jiu-Jitsu” in the U.S. but he’s not going to keep me from using “Carlson Gracie”. Like I said, I want nothing to do with “Gracie Jiu-Jitsu”. I am “Carlson Gracie Jiu-Jitsu” . Nowadays, the “Gracie Jiu-Jitsu” is old. They say that strength doesn’t count, but it does. Maybe it wouldn’t make a difference if the opponent didn’t know anything. If the opponent knows something, then the strength starts to count. Carlson Gracie Jiu-Jitsu is a combination. It’s endurance, technique, etc. I’m not going to have a student of mine who’s 90Kg (198Lbs) fight someone who weighs 130Kg (286Lbs) and is very good also. They’re lost, they’ve stopped in time and space. Along with my students, I’ve evolved the Jiu-Jitsu even further. They call themselves the best, but they don’t prove it. In the U.S., they don’t enter their students into any outside competitions. Let me tell you a little story about Rorion. Every day Rorion used to come to me and ask me if I knew how to speak English, and I would say no, I didn’t know how at all, and he would keep asking me and Rillion every day. Then he invited us to do a television interview with him. He was sitting in the middle, and Rillion & I were on either side. I couldn’t understand a thing. All I understood him saying was “Rillion Gracie and Carlson Gracie” once in a while, and pointing at us. OK, one month goes by, and I was here in Brazil when a friend of mine called me to say: “Carlson, I saw the interview with you, Rorion and Rillion in the U.S., he only told lies.” “You don’t know any English, do you?” “He only said bullshit, and you were practically agreeing with him.” “He would talk and turn to the sides saying that you and Rillion were there to confirm it.” Then I went to my friend’s house, for him to translate exactly what was said. Then I found out that Rorion said that he was a national champion for 20 years and had never lost and that he had invented the Gracie diet. He even said that my dad was just a fucking assistant of his and that it was Helio Gracie who brought Jiu-Jitsu to Brazil. Lies over lies! When I found out, I was so mad!”