Can You Be Overweight And Still Excel in Brazilian Jiu Jitsu? 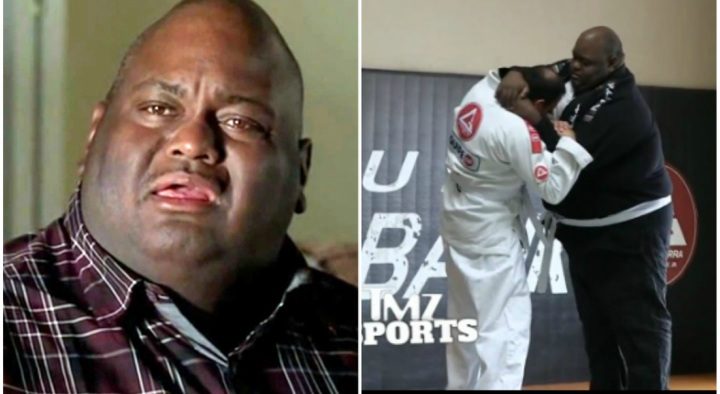 „I am overweight. So can I still train Brazilian Jiu Jitsu?“ The question which plagues a lot of soon-to-be BJJ white belts… And the one which makes them afraid of beginning their Arte Suave journey more often than not.
However, being overweight doesn’t have to stop you in your tracks. You can be overweight, and still train – here is why and how.

CHANGE YOUR MINDSET ABOUT BEING OVERWEIGHT AND TRAINING BJJ

Unsurprisingly, the first thing you’ll have to deal with is your mindset. That is, it’s imperative that you stop thinking of being overweight as something which’ll always be hindering you on your Jiu-Jitsu journey.
Sure, it will be quite difficult in the beginning. However, as the months pass by, you’ll both get accustomed to using your bodyweight productively, and lose it.

YOU COULD DO SOMETHING BEFORE BJJ, BUT…

If you’re overweight, you may come to an opinion that you should first lose a bit of weight first… Before coming to your first Jiu Jitsu class.

Now, this could be a reasonable approach. Perhaps you should take up running or swimming, going to the gym; while combining it with a caloric deficit, so that you lose weight and elevate your conditioning.
This can all be very effective. However, real-world examples often show that this sort of an approach is a faulty one. Basically, almost anyone who waits to begin with BJJ until he’s „ready“ for it – never begins training.

Don’t lose time and sign up for the trial class immediately. Plus, even if you were to build some cardio beforehand, you’ll still gas out on your first training sessions. BJJ is a different animal.

BE CAREFUL – WITH YOURSELF AND OTHERS

Even though nothing should stop you from training Jiu Jitsu, you should still be careful on the mats. As an overweight person, you do have a higher risk of suffering an injury during training; most often, due to the unorthodox movements that make up BJJ. Therefore, pay extra attention to what and how you do on the mats.
Don’t compare yourself to others. If you try to get on the same plane with everyone else too fast, you’ll spend more time off the mats… But if you do stuff at your own pace, then you’ll stay health – and you’ll keep improving.

However, you should be careful with others as well! That is, be careful with your training partners, especially the newcomers. While you should use your bodyweight to your advantage – through the crushing top pressure – try to use it selectively.
Don’t use it to your fullest at all times. Not against those training partners which weigh much less than you do, for example.

WORK ON YOUR BOTTOM GAME

Nevertheless, you’ll probably be tempted to use your bodyweight advantage by focusing on your top game more often than not. That is great, but beware that you should put extra attention on your bottom game.

Why? Because it will teach you how to move better, and because it will often force you to be more active than you are on top. In a word: you’ll become better in Jiu Jitsu!

GET YOUR DIET IN CHECK

And finally, your goal should be to lose weight. However, as you train BJJ and due to an increased appetite, you may actually start eating more than you did before!
So, get your diet in check. Eat healthier foods, while trying to hit that caloric deficit. The combination of these two will make you healthier and shed off those pounds.