Butterfly Sweep Your Opponent From Standing… Straight Into A Darce 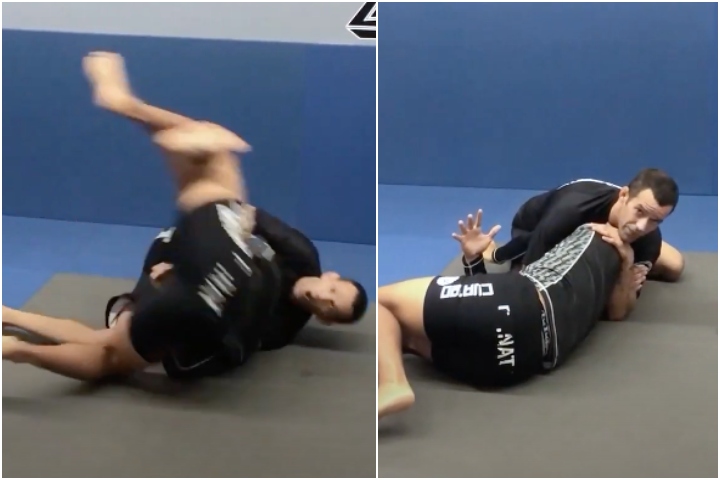 The art of chaining transitions and submissions from one another is perhaps the most beautiful thing in Brazilian Jiu Jitsu. Wherever you start from, from whichever position it may be, you can always lead your opponent into a submission that they would least suspect. Now, with that in mind, what would you say if we told you that you can transition from standing into a Darce… In a matter of seconds and just two linked moves?
Yes, that’s entirely possible! Joel Bouhey shows how to set this up.

JUST BE A BIT MORE AGGRESSIVE

But, before we examine Joel’s fantastic Darce setup, let’s take a moment to think about what you need to do in order to make it work. You see, the thing is that some techniques you’ll be able to hit in tournaments just by utilizing fluid movement and a clear mind. However, there are some that won’t work unless you’re aggressive about setting them up; aggressiveness is a precondition to making them effective!

Such is the thing with this setup. As you’ll see, it’ll start from a Guillotine Choke. And the fact of the matter is that a lot of Jiujiteiros aren’t used to making their Guillotine Chokes as vicious and as hardcore as possible in training… Let alone using the Guillotine to pull their opponents down to the ground and reversing them with it!
Now, you most certainly shouldn’t go „pedal to the metal“ with your training partners. Even this technique will require you to start off slowly, so as to get the feel for it. But it’s of great importance that, as you and your training partner get used to it, you start implementing the setup with more aggressiveness.

Make the Guillotine tighter. Step in with more speed. Transition with more force. This will make sure, once the day of the tournament comes, that the opponent doesn’t just slip out of your hands and makes your attempt obsolete. Commit to it and leave nothing behind.

Okay, so in order to begin with this Darce setup, Joel makes a point that you need to catch your opponent in a Guillotine first. You can do this either when they go for a takedown, from a Snap Down, or from whichever other scenario; just make sure that it is an Arm-In Guillotine.
Also, pay notice to Joel’s emphasis on learning to do this slowly at first. Your training partner isn’t supposed to shoot for the Double Leg full-power immediately; have them do it with less speed, as you focus on getting the whole setup right.

From there, Joel sits down towards his training partner – but not in a „regular“ manner. Instead, he extends one leg in front; whereas his other leg – as he sits down – catches the training partner’s leg on the same side. He hooks it and uses the momentum to flip the partner over to the side opposite to it.

Once your opponent lands onto the mats, you’ll have an opportunity to set that Darce up. Basically, as they’re down, Joel shows that the arm which doesn’t have the Guillotine grip can now shoot through, around the opponent’s arm and below their neck. Then, grab the back of the opponent’s shoulder so as to solidify the position, while you use your other arm to post and retain balance throughout the movement.
Once here, it will be a piece of cake for you to finish the setup; just lock your regular Darce grip and you’re good to go for the final part of the equation – the opponent’s tap.

If you have an armpit, you have a darce as Joel Bouhey shows you innovative ways to lock in this submission. Learn his system to Darce Everywhere. USE PROMO CODE “BJJEE TO GET 10% OFF.