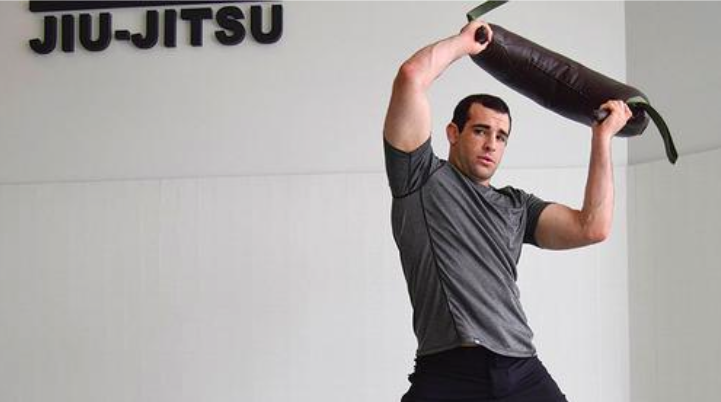 The Bulgarian Bag was designed specifically with one sport in mind: grappling.  In 2005, the bag’s creator, Ivan Ivanov, was looking to create a fitness tool that could be used on the wrestling mat while offering an intense, functional workout without damaging the mat’s surface.  The crescent shaped, sand-filled bag was the result, and since then, the Bulgarian Bag has been used by Olympic level wrestlers, ADCC champions, and fitness enthusiasts alike.  The construction and shape of the bag is what makes it unique, as it offers users a very effective workout like no other exercise tool can.

With respect to Jiu Jitsu, the Bulgarian bag has tremendous carry over to the mat, by improving grip strength and endurance, developing the shoulders, legs, and core, and seriously challenging the cardio respiratory system.  Let’s take a look at some of the key components of the Bulgarian Bag.

The first thing new users will notice is how dramatically the Bulgarian Bag affects the grip.  For the first few sessions, even seasoned grappler’s will have trouble maintaining a tight squeeze on the bag’s leather handles.  This is one of the bag’s strongest features.  Although you won’t get the same type of finger workout you would gripping a gi, the Bulgarian Bag does wonders to develop the musculature of the hands and forearms.

Typically, exercises are linked together in a circuit when using the bag, so strength endurance, or the ability to maintain strength over time, is developed, which is a must-need for Jiu Jitsu.  The bag was originally constructed for Olympic wrestlers, so the idea was to simulate gripping a wrist or an ankle.  No-gi grapplers will immediately notice the benefit, however a strong, enduring grip is of value to any athlete on the mat. The day after your first session with the Bulgarian Bag you’ll most likely notice that you’re sore in places like you’ve never been before, one of which being your core.  There are certain exercises that can only be done with the Bulgarian Bag, and these new movements force a new response from the body.

The spin, an extremely dynamic full-body exercise, is a staple movement in Bulgarian Bag training.  It is the equivalent of the swing in kettlebell training, and requires you to spin the bag around your head and body for repetitions.  This motion involves counteracting dynamic forces, and requires you to stabilize through the core throughout the entire set.  If core stability is compromised during the spin, the force of the bag will pull you out of alignment and often the result will be some unwanted contact with the bag.   This translates quite well to Jiu Jitsu, as grapplers are constantly resisting and imposing forces on the mat.

The Bulgarian Bag can also be used to perform a variety of classic exercises, like the pushup, press, lunge, squat, and row, which is what makes it such an excellent tool for grapplers.  Due to the relatively low weight of the bag (18lbs for small athletes, 26lbs for medium, and 37lb for large athletes) strength with never be the bag’s main focus.

Functional athleticism and full body strength-endurance however, are the bag’s key qualities and can be developed through an endless mix of classic and sport specific movements.

Grappler’s can choose more standard protocols like 3 sets of 10 repetitions, or elect for more Jiu Jitsu focused sets of 30 seconds of work and 10 seconds of rest, for 5 to 10 minutes.  Either way, the bag affords you the flexibility to get creative in your workouts without requiring multiple exercise tools or traveling to a gym.

The bag’s final, and maybe most beneficial asset, with respect to grappling, is its ability to challenge the cardio respiratory system, and thus, one’s mental toughness.  Any exercise performed long enough or fast enough can challenge the heart and lungs, however, the exercises specific to the bag have a unique way of simulating that feeling you get in your last round of sparring against that upper belt who doesn’t quit.

It’s a combination of burning muscles, lack of oxygen, a grip ready to quit, and down right fatigue, that we all know too well.  Somehow, though, we pull through, forcing those last ditch efforts, knowing that buzzer will soon sound and we can submit to exhaustion.

The bag makes men out of boys.  Often, the idea of quitting comes to mind working with the Bulgarian Bag.  Sometimes the body does quit before the mind, as often is the case when the grip fails, sending the bag flying off on its desired trajectory.  However, with continued use, all of these components with the bag will improve, as will your efforts on the mat.

The standard Bulgarian Bag protocol involves four movements; the spin, the snatch, the armthrow, and the pushup.  These exercises are combined in a circuit of ten repetitions each for four rounds.  Beginners can elect for three sets while advanced users five, however, the standard protocol is a great way to become familiar with the Bulgarian Bag and reap some of the benefits it was designed for.

Spin (10 each direction) – Use the power of your hips to propel the bag around your head, bending your arms at the top to keep the trajectory of the bag close to your body.  Straighten your arms fully at the bottom to allow the bag to gain full momentum for the next spin.  Stability of the core is a must for this move, as well as speed.  Don’t try to force the bag around only with your arms, but allow the bag to fly, while you counteract the force of the bag with your core and hips.

Snatch (10) – Stand with a wide enough stance so the bag can fit through your legs.  Think of hinging at the hips as you would with a kettlebell swing, and lightly tapping the bag to the ground before you explode it up overhead.  You should feel a good stretch in your hamstring at the bottom of the Snatch.  When the bag reaches your eyes on the upswing, aggressively push up with your arms as if you were pressing the bag overhead.  This will tame the arc of the bag and prevent it from hitting you in the back of the head.

Armthrow (10) – The armthrow is all about lateral movement.  With the bag resting on your back, uncoil your body and throw the bag at your opposite foot.  When you transition from one side to the other, finesse the bag onto your other shoulder and reach your butt back as if you were sitting on a chair.

Push Up (10) –  Keep your arms in close and your core tight.  As you descend squeeze your elbows close to your body, think as if you are in side control and must stay tight the whole time. Maintain this position and you ascend to the top position as well.

Try this circuit for a mix of classic and Bulgarian Bag specific exercises:

Plank Drag – This is a very functional move that will transfer well to the Jiu Jitsu mat.  Maintain a plank or push up position as you reach underneath your body for the bag.  Pull the bag along the ground while keeping your core extremely tight.  Do not allow your hips or body to turn, but keep everything facing the ground.  Do not allow your hips to come up or sag, maintaining a plank position the entire time.