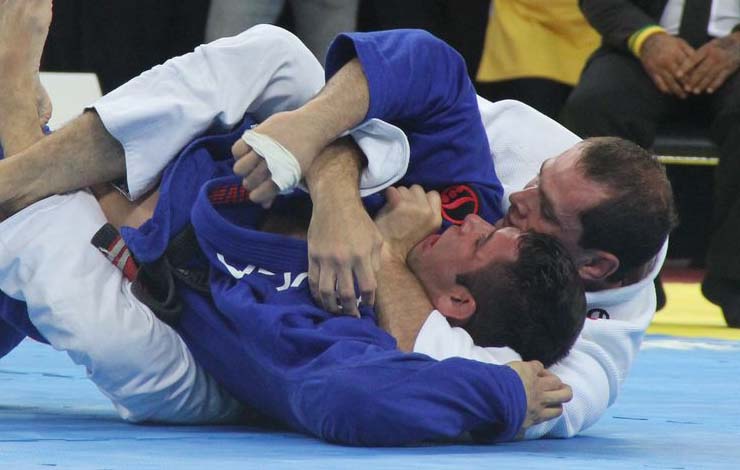 A jiu-jitsu match for the ages happened 3 years ago it was quite a revelation in eyes of many jiu-jiteiros. One person that was affected the most arguably is Marcus Almeida Buchecha, who was manhandled rather quickly by Roger Gracie as his crushed expression showcased.

Buchecha made a big mistake when he faced Roger. A mistake that usually white belts make. When Roger took Buchecha’s back, Buchecha was trying to escape and clear the hooks instead of defending the hand that was creeping him and choking him.

Roger’s dad Maurcio Motta Gomes would go on to say that this was probably because Buchecha had the point mentality ingrained in his mind, to prevent the points, but not letting Roger set his hooks, but he forget the priority of defending the choke first, which was the bigger danger.

Buchecha on what he’s learned from the loss:

“Roger did not allow me to get to my game. I had no injuries to blame. Roger made good grips when he pulled guard. I made a mistake against a guy you can’t make mistakes with.”

Gracie was further asked to break down his movement as he took the back of Marcus Almeida Buchecha:

“So I took the moment to get off him and went straight to his back. Cause I was holding his arm, there was a huge gap for a hook to go in. Then I was able to put both hooks in. “

“When I got his back he tried to turn but he turned to the side and I was holding his collar. And I think he stayed there. He got my hand when it went to his collar … The hand was already in. And I start squeezing… I knew this is it – he’s not gonna get out. “

This is why it is always important to survive first and escape second. The great John Danaher explained it perfectly in one of his IG posts:

“Survive first – escape second: When you first begin Jiu jitsu is natural to feel totally intimidated by the power of your more experienced training partners attacks. Some days you feel that as soon as they get a good position on you, it’s all over. Start with the most modest, yet important Jiu jitsu goal – survival.

Begin by seeing how long you can hold off submission attacks. Learn to tuck your him back in close to your torso and chin to chest. Learn to turn on your side rather than flat on your back so that you can bear weight more comfortably. Once survival seems attainable you can learn to relax a little – AS ANXIETY LEVELS FALL, YOUR CAPACITY TO THINK, REASON, RECALL INFORMATION AND SOLVE PROBLEMS WILL INCREASE – and that’s what will get you out of bad positions. Everything begins with survival skill that leads to mental calm.

Mental calm begets sound decision making and sound decisions will create the routes you need to exit out of trouble. Make your first goals small. How much longer can you hold off a partner who usually finishes you in one minute from dominate position? If you can last two minutes you’re getting twice as good as before – that’s a small beginning, but most beginnings are small – in time they can lead to results that are huge.”