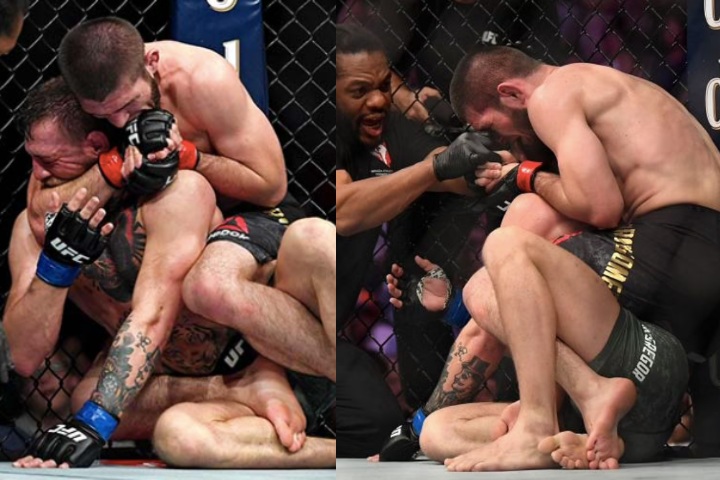 Khabib Nurmagomedov had one of the most spectacular and dominant careers in mixed martial arts. Many consider him to be the greatest mixed martial artist of all time because of his impressively perfect record of twenty-nine wins and zero losses. His style comprises primarily a mixture of Sambo, Judo, and Wrestling in the octagon.

This is a particularly unique mixture, as mixed martial arts is currently dominated by Muay Thai, Jiu-Jitsu, and Boxing. Khabib’s unique style allowed him to exploit the gaps in other martial arts and fighters by presenting them with situations they’ve not prepared for. Today, Evolve Daily shares 5 ways how you can develop a style like Khabib Nurmagomedov.

Although Khabib finished the majority of his opponents with submissions, he was quite the underrated striker. He has faced his division’s most dangerous strikers and somehow always managed to come out on top with a victory. Khabib was even able to knock Conor Mcgregor down with an overhand right, a feat that other striking specialists have not been able to pull off. Despite all of this, many mixed martial arts fans and even analysts insist that Khabib is an amateur at striking. This is most likely due to Sambo’s punch mechanics and aesthetic being compared to the mechanics of traditional boxing.

While a skilled boxer flows and shows graceful footwork, Khabib’s striking is aesthetically rough around the edges. Khabib is peculiarly skilled at closing the distance with opponents that prefer fighting on the outside. He does this by being very patient and staying in his stance while actively searching for an opening. He throws a high volume of jabs, keeping his opponent’s guard occupied and preventing counter shots while he evaluates the situation.

During the early rounds of a fight, Khabib utilizes his jab, wearing his opponents down, draining them of their physical and mental stamina. Once he feels that his opponent has lost their explosiveness, he’ll use his jabs to close the distance and initiate his grappling. Another aspect of Khabib’s striking that is often overlooked, is his power. His punches are more compact than those found in traditional boxing. This is due to his build, reach, and also his style. While fully extending on every punch may slightly increase his range, it would however drastically decrease his defensive shell. Khabib rarely extends his arms fully when punching, this allows him to perform quick combos, follow-ups, and blocks in the event his opponent counters.

Khabib’s success in mixed martial arts was primarily due to his high skill level in the clinch and efficiency at takedowns. He was able to take down skilled strikers, even those who were specifically trained in grappling defense. His fighting philosophy was taught by his father, the late Abdulmanap Nurmagomedov when he was a young child in Dagestan. In contrast to other forms of wrestling, Khabib’s sambo emphasizes the utilization of the legs and cages as a form of offense.

While other grappling arts such as American Wrestling and Jiu-Jitsu primarily utilize the arms to control the opponent and the legs to assist with submissions, this is the opposite case in Sambo. Sambo fighters utilize their legs to control their opponent’s legs and their arms to inflict damage via strikes and submissions. When shooting for a takedown, Khabib aims to get his head on his opponent’s hip, which corresponds to the leg he is shooting for.

Ideally, if he were to shoot for the left leg of his opponent, he would also get his head to the left side of their hip. This allows him to control half of his opponent’s body, going in for various trips while he works his opponent to the ground. Khabib will often body-lock his opponent, draining them of their stamina and getting them to the ground via a Judo style hip throw. This involves him stepping across his opponent’s centerline after off-balancing them with a strike or a grappling maneuver. Most fighters use the cage as leverage to get back to their feet after an attempted takedown.

Khabib reverses this philosophy and uses the cage as leverage to get his opponent off balance. Once he has his opponent against the cage, he can react to what they do. He can move to the aforementioned hip throw, or step around and secure a figure four lock on one of his opponent’s legs, simultaneously controlling one of their arms.

One of Khabib’s signature techniques is his leg wrap. After taking his opponent to the ground, he wraps and squeezes his legs around the lower part of his opponent’s legs while extending the rest of his body towards their head.

This places immense pressure on his opponent’s knees, essentially preventing them from using their lower body to escape or generate any force on the ground. It is essential to train your legs to sustain the squeezing pressure needed for twenty-five minutes. This can be achieved through partner drills or solo rounds squeezing a grounded heavy bag.

Khabib’s ground and pound sequence have been an unstoppable force in the lightweight division during his reign as champion. Once Khabib has his legs wrapped around his opponents, he looks for openings to finish the fight. By utilizing his legs to control his opponents, he frees up his hands to strike his opponent’s face and body, denying their attempt to defend and shrimp out of the mount.

Interestingly, Khabib seems to prefer finishing his opponent with strikes rather than a submission. These little details stylistically make it very difficult to deal with him.

Khabib is known to talk to his opponents as he strikes them during his ground and pound, ordering them to give up and that he deserves the win. This demoralizes his already battered opponent greatly, often resulting in a submission.

Combining the use of tactics along with his strong mental pressure shows the dominance of Khabib’s skillset, in comparison to even the top-tier UFC fighter.