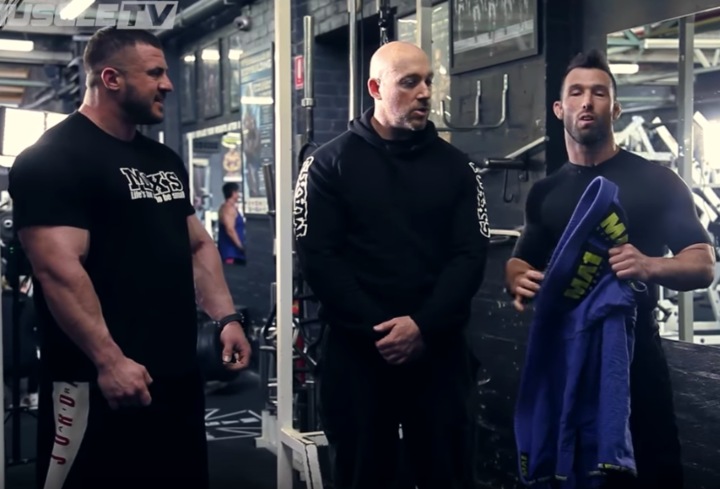 Have you ever thought to yourself: „How well would a BJJ practitioner fare against a bodybuilder in a strength competition?“ Well, we have great news for you! MuscleTV has decided to put J.T. Tenacity, a jiujiteiro, and Matt Smedley, a bodybuilder, to the test in a specific strength competition against each other!
How is the competition set up? They are both given a choice so as to which exercises they want to test themselves and the other person in. Therefore, J.T. chose – because of BJJ’s inherent grip and core strength – exercises that involve the „grapple grips“ piece of equipment, a Gi-specific pulling exercise and a „man up“ exercise, that he says he has developed himself. Matt, on the other hand, prepared the bench press, the cable row and the barbell curls as his markers of specific strength.

To start off, they begin with the bench press. After a few build-up sets, they reach 100kg/225lbs and give their absolute best effort in order to do as many as they can! Matt takes the win with 10 repetitions over J.T.’s 6 reps. Bodybuilding takes its first win.
After that, they step into the world of BJJ, with J.T. coming in with the „grapple grips“ piece of equipment, which tests their forearms, biceps, lats and overall upper body strength. Matt does well in this case as well, with 7 reps; but J.T. shows the „real deal“ of Jiu Jitsu grips and gets the win for BJJ with 12 easy reps in total.

For the third test, they’re back to bodybuilding specific exercises, with the cable row being the bodybuilder’s exercise of choice and 10 repetitions per set as a benchmark for successfully finishing it. By building the weight up throughout sets, they reach 120kg and Matt takes the win; with J.T. reaching the maximum of 5 reps on this weight.
J.T. then takes on the podium once again, with another BJJ specific exercise that includes a Gi: the „Gi grips leg raises“ exercise, that includes hanging a Gi over a bar, gripping it and then doing toes-to-the-bar leg raises. Matt is immediately skeptical about this exercise, particularly due to, in his own words, the lack of strength in his core. But they proceed to test themselves out regardless, with J.T. taking a dominant win with 10 reps, as opposed to Matt’s 4.

For their last two exercises, they first go to Matt’s exercise of choice – bicep curls. They perform it with a total weight of 50kg and they aim to get in as many reps as possible. With almost no effort, Matt gets in 18 reps! J.T., even though he put all of his effort into this test, manages to get 12 in.
Then, they go forward with the last exercise, which J.T. says was his own invention: the „man ups“. Here, he goes on to explain, you lay down with your belly on the floor. Then, have your training partner get on top of your back – the goal is to stand all the way up and get all the way down in that position. J.T.’s core strength has contributed to a dominant win here as well, with him nailing 8 reps and with Matt getting in only one rep.
That ends the result in a tie, with each athlete claiming three victories.

The competition played out in friendly and respectful spirits! Take a look at it for yourself, in MuscleTV’s video below: