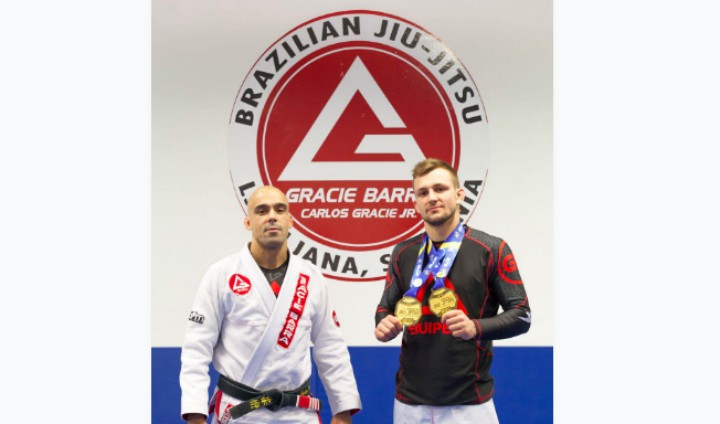 BJJEE is always looking out for rising stars, and one of them is Nejc Hodnik who trains under 2x European BJJ champion Carlos Maia of Gracie Barra Ljubljana in Slovenia.
The young Nejc has been racking up medals all over Europe on both IBJJF and UAEJJF circuits and this year won double gold at the IBJJF Europeans No Gi. BJJEE sat down with the young champion to find out more about his career and plans:

Hi Nejc, where are you from and when did you start training BJJ?

First I would like to say hey to all of the readers, and I would like to thank you BJJEE for the opportunity.
I am from a little country called Slovenia which for now, is not that well known in the BJJ world. My home town is Slovenj Gradec. It’s a small town where I was also introduced to BJJ for the first time. This was in an MMA club headed by Jure Vušnik and also by my judo coach Ruslan Yankovskyy because he is really enthusiastic about newaza and BJJ. But I actually started with BJJ when I moved to Ljubljana where I started to study mechanical engineering and I signed with Gracie Barra Ljubljana.

Could you tell us about your BJJ career and BJJ achievements?

When I moved to Ljubljana, I already had some NoGi experience and some basic knowledge about it.
Hehe, my instructor, Carlos Maia, probably won’t forget my first days because I was really annoying. All I wanted to do was NoGi and heel hooks! 😛 But he said, “Look what if instead of grabbing the heel, you grab the Achilles; and instead of just jumping around, you put the Gi on and learn how to really move….” I ended up listening to him and I think it wasn’t a bad idea! 😛
So after one good year, I received my blue belt and also started competing. My first competition was IBJJF Berlin Open where I got my first BJJ medal, I was second in NoGi. Then I started to compete more and more… Till now I won or medaled at quite few UAEJJF competitions like Zagreb and Ljubljana Nationals and also several IBJJF Opens like Paris, Munich, London, Berlin… I also competed three times at a local submission only tournament in Brežice. I won the tournament all three times and also got trophy for best grappler two times as the only competitor that finished all fights via submission. But the biggest achievement till now was winning double gold at this year’s IBJJF NoGi Europeans in Rome. 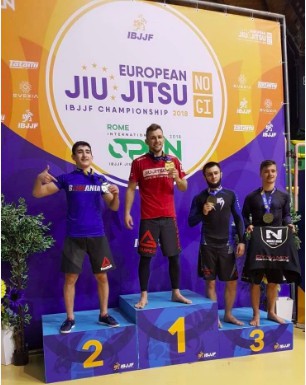 How was the feeling to win gold at Europeans?

It’s hard to describe, probably one of the best feelings I ever had. Especially because I was working really hard for three years now to make it happen and I always missed it a bit. But my coach Carlos Maia was all the time telling me “you will make it, you will be a champion” and I believed him also. And then with hard work and perseverance it finally happened. I just jumped in the air, looked to my team and started screaming. It was incredible, especially because I fought five really tough guys in my division and managed to submit them all. And the absolute wasn’t any different. I couldn’t sleep for more than three hours next two days (hehe).

Here I would really also like to thank my whole team because you can maybe think we have an individual sport but it’s not true. You can’t make it without good coach and good team. I am really grateful for my team Gracie Barra Ljubljana! My main coach Carlos Maia is studying the art and the sport how it is progressing so we are never behind. He is keeping an eye on my trainings and competitions constantly and is also correcting and improving my game all the time. I don’t know if all of the competitors have this luck of having such a good coach by their side all the time! Like John Danaher just on another lvl! 😉
And then there I have another big plus! I have another strong team behind my back with another awesome coach who is sometimes like my second father. His name is Ruslan Yankovsyy he is a judo coach and has a very good club called Judo club Acron Slovenj Gradec with few amazing coaches that also help me a lot, thanks Robi, Tadej and Stojan! And the guys from there are like my brothers and sisters.

When I am further from competitions ,then my diet is less strict and I experiment more at trainings. When it’s closer to the competition, my diet gets strict and I start to repeat the most important techniques and tactics more and more.
The trainings usually look like this. I wake up at 5:30am and go to the gym to do BJJ drills. Then I sleep a bit in the gym and have next BJJ training at 10:00 till 12:00. Then I run home to eat, take a nap and go back to gym where I help with kid’s class and then at 18:30 till 20:00 I have another BJJ training where we also go as hard as possible. On some days I also have some fitness in the morning instead of first BJJ training.
Than I have this other guy, my best friend since we are little. His name is Anže Jert and he is my nutritionist and my strength and conditioning coach. He writes all my meals and plans all my strength and conditioning trainings. We measure all my food, my heart beat during day and during sleep and also how good and deep I sleep. I take this part really seriously, if he says I can take only 100g of pasta, I will take exactly 100g of pasta and not a gram more. And all this sweets and bad food are out because our system needs to be clean for all the hard trainings to be able to work at maximum all the time and to regenerate fast.
And then at the end of week when all hard work is done, Matjaž Jeseničnik comes into the game with physiotherapy. He checks how my muscles are and tells me if I am doing something wrong and relaxes my muscles and sets them for another hard week.

What is your main goal as a competitor and what are your main plans for the future?

Currently I am looking for sponsors to be able to fight at more events and to be able to compete in the whole circuit. Till now I was sponsored by my club Gracie Barra Ljubljana and Judo klub Acron where my team mates collected money to pay for some of my trips so I would like to thank them here again! And also my family!
I know I am just a blue belt and that I still have a lot to accomplish especially because my biggest dream is to become a black belt world champion and to compete at professional events like ACB and Polaris. But training hard is the thing I like the most and I am ready for all the challenges ahead!