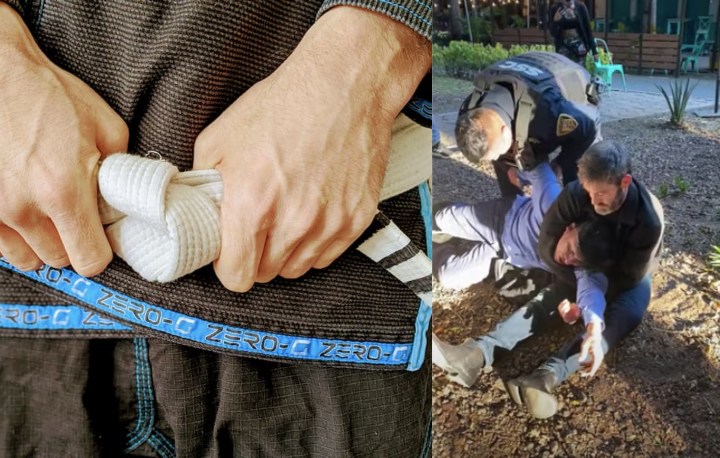 A 49-year old American BJJ white belt was in Mexico with his wife on vacation when they were confronted by a group of pickpocketers. He used the little jiu-jitsu that he knew and put one of the pickpocketers in a strange head-and-arm choke variation, call the police and get his wallet back.

Proof that a little BJJ can go a long way to save you in the streets.

First of all – Mexico City is an Amazing City – and we will definitely be back!

It is generally safe, but we had a run-in with petty theft:

This unfortunate man is part of a network of at least 4 thieves who stole my wife’s wallet from her bag, while we were seated at a cafe in Roma, Mexico City. They did the old pass-around, and I was certain that one of the female thieves had the wallet, but I was not sure how it would look if I had dragged her to the ground, so this man had to suffer.

We did NOT press charges – mainly because we felt sorry for this man. Petty criminals do not bother me as much as the truly evil people in the world, who are doing much worse things than this man (stealing wallets with no cash in them, and soon-to-be-canceled credit cards).

Also, he thought he was dying – you can hear me telling him “It’s okay,” over and over – and even patting him on his lower back at the very end. I wanted him to know that better days were in front of him.

He just picked the wrong targets. I look like just a normal dude. My wife also does martial arts – I just got to him first.

I’m only a white belt in BJJ (I have a higher belt in another martial art), but even I know that a better head-and-arm choke position would be for me to use my head to press his own deltoid against the carotid artery on that side, but he was bleeding from the mouth, and I was comfortable holding him with my head at that distance. In addition, I wanted him to maintain consciousness, so that the police could ask him about the wallet. Also, I didn’t want to get more blood and dust on my stylish jacket.

We also did not press charges because we got the wallet back! Here’s how it happened:

Another patron of the cafe (I got the story directly from him afterward) followed one of the other thieves and saw her get into a waiting Mazda. He gave the license plate number to la policia, who found the car on a security camera, and saw her throw the wallet out of the car, tied up in a black plastic bag. La policia retrieved this bag, and returned our wallet to us within 45 minutes. Bravo private citizen! Bravo Departamento de Policía de la Ciudad de México División Roma! Muchas Gracias!

My wife knew something wasn’t right about the three thieves sitting next to us. Always trust your intuition! The cafe staff alerted us to what was really going on in this confusing situation, and really helped us out. Thank you to the amazing staff at the Boicot Cafe!

If you are considering visiting Mexico City, definitely do so! I know I will be back. I was never afraid for my personal safety.

99.9 % of the people will look out for you! They are the most polite and courteous people I have ever met, and the food is outstanding!