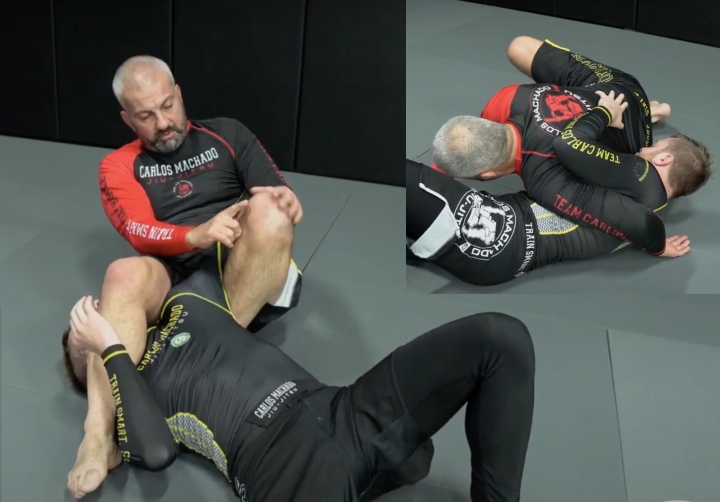 The road to submission in Brazilian Jiu Jitsu is seldom an easy one. What’s more, it could be argued that it’s an even more difficult one in No Gi; you and your opponent are slippery, plus you really don’t have as many setup options as you do in a Gi! That’s why it’s important to explore your options in No Gi BJJ – so much so that you should give a shot to those setups you didn’t dare to try before.
One of those rarely seen, but very effective (and unexpected!) setups is the Invisible Armbar aka the Paper Cutter Armbar. You’ll be setting it up from Side Control, while preserving extraordinary positioning over your opponent throughout the process.

Let’s take notice on how the legendary Carlos Machado demonstrates this setup and technique.

POSITION – AND CONTROL – BEFORE SUBMISSION

The good old advice of establishing position before going for the submission applies here through and through as well. Starting from Side Control, Carlos Machado showcases that your first goal is to isolate the arm which you’ll be attacking; in such a fashion, that it ends up behind your back and scapula.

Once you’re in full control, you can start setting up the Paper Cutter Armbar! Carlos explains that you need to move your hips a bit further away, so that it ends up behind their other arm. When it does, you’ll be able to control this arm with ease, pinning it down to the mats.
Then, you will turn your head away while your other hand now turns and swims underneath the opponent’s second arm (one which you’ve been controlling all the way from the beginning). Once you do this, use your palm to control their shoulder from underneath.

To finish the setup, Carlos demonstrates that you need to step your leg over the opponent’s head and move your hip towards their shoulder. This’ll enable you to slide your other leg underneath them; then just tilt a bit to the side, pop your knee up while preserving good arm control, and finish the Paper Cutter Armbar!