Popular Blogger MegJitsu (Check out her blog megjitsu.com) recently wrote an article where she talked about ‘How to Change BJJ Schools’. Up until recently, Meg had been training BJJ in the UK where she had received her purple belt. She had to move back to the US, and while there was looking for another school teaching Jiu-Jitsu. She chose a traditional Gracie Jiu-Jitsu school which focused more on the self defense aspect as opposed to the sport aspect. The instructor is actually new to Jiu-Jitsu and is a blue belt. The classes do not include any sparring :

GJJ Victor is run by John Ingallina, owner and operator of United Martial Arts Center in Victor, NY. John, though relatively new to GJJ/BJJ, is a veteran martial artist with in-depth experience in traditional martial arts including Japanese jiu jitsu. He runs a clean, respectful and welcoming facility that attracts men and women of a wide age range. His teaching is clear, methodical and professional. He and his students have been very open to some mad purple belt coming in off the streets and I’m delighted to have met John and his students.

GJJ, or the fundamental and basic core of BJJ, is what appeals to me. I have some reservations about the Gracie University approach. I also recognise its strengths and I hope to discuss this topic further when I have greater experience with the Gracie University method of teaching and learning. What I do know, right now, is that material branded ‘GJJ’ is what I want to train. Dave Birkett and Marc Walder, my instructors back in the UK, focused on GJJ material to a very fine degree of detail. This is not the post to dwell on the community’s divisions over the relative merits of BJJ versus GJJ (you can see a nice post by Dave on this here). I will assert now that ‘GJJ’ represents the bread and butter of ‘BJJ’. These are the techniques that I have drilled since coming into the art. They have helped to ‘save my bacon’ when rolling with bigger, stronger, younger, faster players. I love this material. It is what I want to continue to drill and hone. Gracie Jiu-Jitsu Victor can offer me that and I am excited to be joining this group of detail-oriented and careful practitioners.

Many of the folks at GJJ Victor have significant Japanese jiu jitsu experience and there are opportunities to spar in the traditional classes and open mat sessions. The GJJ classes, as currently offered, do not include sparring. (This probably represents my central gripe about the Gracie University approach, though, again, I can see some benefits as staving off sparring does seem to entice a wider range of folks onto the mat and perhaps once players are a bit more seasoned they can handle the ‘realness’ without the drop out rate – would be interested in some data on this!) 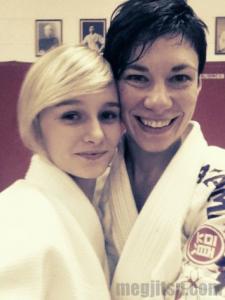 Meg, on the right

Meg although a seasoned purple belt, decided to remove her hard earned BJJ purple belt and started over again with a white belt in Gracie Jiu-Jitsu:

So, as the rest of GJJ Victor did when entering the Gracie University system, I too will put on a white belt and work my way through the GJJ belt system (more on this as we go!).

In Brazil, they don’t call what we do Gracie or Brazilian Jiu-Jitsu. they just call it Jiu-Jitsu. Those prefixes were added in the USA. Jiu-Jitsu is one martial art/combat sport all in one.

What do you think about this? Is it normal to not have live sparring (rolling) in a Jiu-Jitsu class? Should a BJJ purple/brown/black have to start from white belt when taking up self defense Jiu-Jitsu?