BJJ Chokes That Will Keep You Safe In A Street Altercation 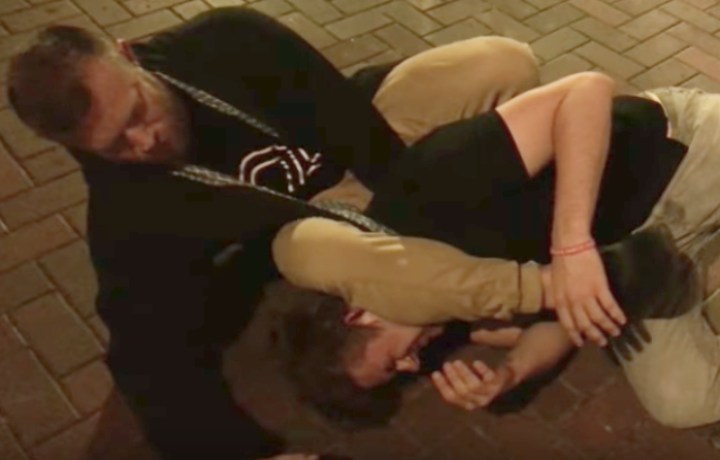 It goes without saying that your goal should always be to not get involved in any sort of a street fight. It’s best to just deescalate the situation by talking with the other side; or, if that fails, to excuse yourself and walk away.
However, you might find yourself in situations in which you just can’t find a way out from. In that case, these chokes from standing position – shown by Eli Knight – could be of help for your self-defense.

First of all, Eli says that „regular clothes“ imitate the Gi very well. This is especially the case with jackets, but with shirts as well; both of which allow you to establish grips for front-facing chokes.

If Eli figures out that he has to act preemptively – if it’s obvious that the other person is going to attack him – he can lay the groundwork for his choke by first throwing a couple of punches. This is done so that he can force the other side to cover; which gives him an opportunity to establish a Cross Collar grip (in this case, on his training partner’s jacket).
Beware, though; he emphasizes that you don’t want to make your second grip and apply the choke immediately. You still need to worry about the other side’s punches. So, you need to offbalance them; pull them down and break their posture, as you step to the side. Now you can get your second grip in and apply the choke.

This will probably be a slow-burning choke, Eli explains. Therefore, he’d also throw knee strikes; they’ll keep the other side on the defense and your choke will have more time to wear them out. Plus, you can also take them to the ground with a takedown or two.

WHAT IF THEY START THROWING PUNCHES?

If the other side had already started throwing punches, Eli shows that you first need to close the distance; get inside the reach of their arms while protecting yourself with your own. Then, you can grip their jacket or hoodie in a Cross Collar fashion.
From there, the setup is the same as it was beforehand; offbalance them, apply the choke and threaten them with knee strikes or/and take them down.

SETUP FROM A CLINCH

Eli says that it’s quite common to get into sort of a clinch situation in street fights. So, if the other side by any chance gains an underhook on you, you need to protect yourself.

You do this by grabbing their jacket’s far-side collar with your underhooked arm. Then, Eli establish your second grip onto their hoodie or the jacket’s material; offbalance them and start throwing knees. Also, make sure that you are pinching your elbows in together as you’re executing the choke.

The last option Eli shows is applicable when you’ve established both a Cross Collar Grip and a grip on the sleeve; you can bring their head down and set up a mix of the Loop and Guillotine Choke.

You could try finishing this from standing, but Eli advises that you take the person down; just in order to neutralize the possibility of them using their free arm to attack you. You’ll do this by underhooking that free arm, placing the palm of your hand onto their back and taking them down by stepping to the side in a semi-circle fashion.
If they hug you with their free arm, in that case you can simply sprawl back and get them down that way as well.

Eli Knight explains these setups in much more detail on the video below: