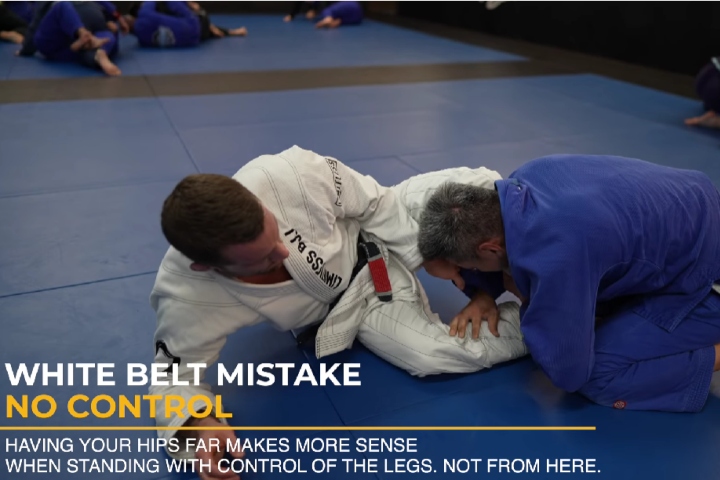 Does a white belt stand any chance against a black belt in a Brazilian Jiu-Jitsu match? Hardly so, unless the black belt is severely injured and/or has both of his legs and arms tied up. However, that isn’t to say that there isn’t use to watching a black belt roll against a white belt – especially if you think that learning from other people’s mistakes is a much smarter tactic than learning from your own!
Jordan, from the Jordan Teaches Jiujitsu YouTube channel, recently posted a black belt vs. white belt video; in which he rolls against his student.

Here are some of the mistakes that the white belt made in the video, that you can learn from.

Mistake #1: the white belt often makes the mistake of just gripping for the sake of it. That is, he establishes grips that have no real purpose; they don’t help him in controlling Jordan’s movement. Furthermore, some of his grips do more harm than good, as they make him susceptible to getting swept.

Mistake #2: want to get submitted easily? Then not protecting the inside position as you defend from the incoming attacks will do the trick.

Mistake #4: the white belt in the video often doesn’t go for any sort of control whatsoever, but just sort of “dangles” in there. Remember: every time you aren’t trying to control your opponent, your opponent will establish his control over you.

Watch the BJJ black belt vs. white belt roll below and learn more from Jordan’s tips: