BJJ Black Belt vs. Judo Brown Belt: Here’s What You Can Learn 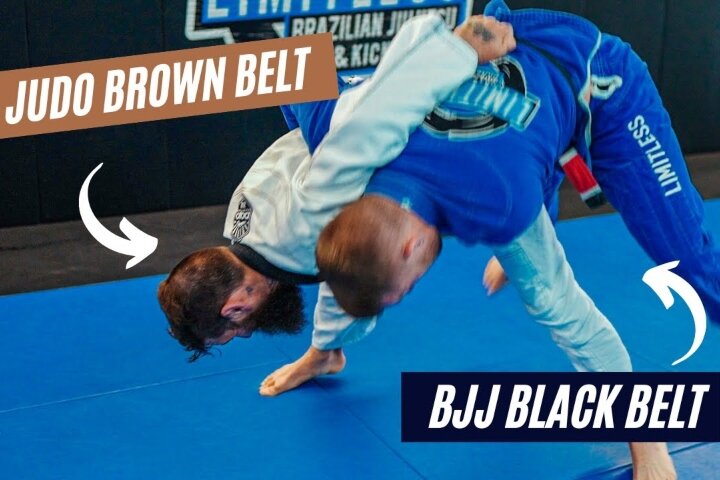 Standing up with Judokas is never easy for BJJ athletes – even for excellent black belts. Throwing people around is a Judoka’s specialty and you have to take that into account when you slap and bump with them… But that shouldn’t be the reason for you to be afraid to play the takedown game. At the very least, you’ll have an opportunity to learn and improve a lot.
Here’s a roll between Jordan, from the Jordan Teaches Jiujitsu YouTube channel, who is a BJJ black belt and Steve, who is a Judo brown and BJJ purple belt. Let’s see some things that you can learn when it comes to the standup game between the two.

Pay attention to what Jordan does: he often goes for the legs. Judo (unfortunately) hasn’t been allowing for leg attacks for quite some time now and that’s a big deficit in Judokas’ game; so make sure to take advantage of it as much as you can.
However, at the same time, Jordan should be more careful about getting behind Steve. For, even though that is the position you ultimately want to get to, you need to be wary of powerful hip throws that Judokas have. Especially brown belt Judokas.

You’ll also need to stay disciplined with your and Judoka’s overhooks and underhooks. Plus, keep in mind that all takedown battle wins (as well as a lot of them on the ground) come from establishing good grips. So, make sure that you win the grip battle as early on in the roll as possible, establishing the all-important inside position during the process.

Watch and learn from Jordan’s and Steve’s roll below: