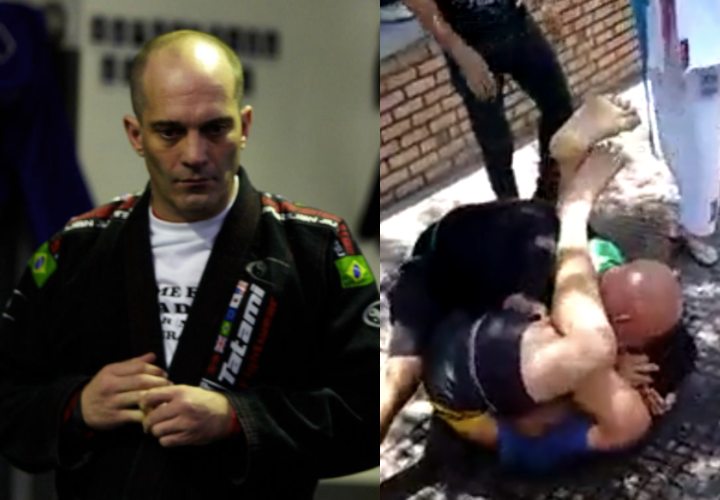 I teach and train Jiu Jitsu primarily as a means to have a set of skills to deal with violent situations out in the real world, competition Jiu Jitsu comes second, always will.

We live in violent times, people in London getting stabbed and killed on a shockingly high scale and only two days ago a guy was stabbed in the head at lunchtime, broad daylight in Croydon town centre…

You owe it your kids and yourselves, wherever you live in the UK, get into some form of combat sports, be it boxing, Thai, Judo, Wrestling, Jiu Jitsu…

Anything that will give you the upper hand, because you never know when or where it’s going to happen; I was attacked two years ago on the steps of the tube station coming home from a 15hr door shift with a messed up back and I know 100% if I hadn’t had any form of training the guy would have killed me or severely messed me up, because not one person stepped in to help me, not a single person. I was on my own.

Thankfully I weathered the storm of punches and kicks and stomps, as I was knocked on my butt on the steps and was fighting with my back half on the steps and against the wall and was basically getting a good dose of ground and pound. I covered up best I could and slipped and weaved and took some good shots, but I managed to get back on my feet thanks to technical get up and carried on from standing and then it was an even playing field, I could kick and strike now.
I gave him some digs and a few kicks and closed the distance with a clinch and got a few headbutts in and got the Thai clinch and being the Jiu Jitsu expert I finished it with a couple of knees to the head and he dropped like a sack of sh*t.
It was ugly. It was messy. No points for a takedown or guard pass, no 50-50 or Berimbolo. It was full on 110% from this guy from out of nowhere, came out the blue, I got the adrenaline dump big time, but have been there many times at work on the doors and used it to my advantage. The average Joe would have just curled up and taken a good kicking and ended up in hospital.
I got a round of applause from the commuters and they got told to f*** right off, why didn’t anyone help me, set of cowards etc and got on the Tube and came home.

If you train BJJ, train for real life at least once a week in class or for half an hour class; pulling worm guard or inverting won’t save you, but putting the gloves and going for it and getting a submission whilst your partner is beating down on you WILL…
I try and give my students the tools they need to get home safely after a training session or a night out or coming home from work, because it’s a world of sh*t and scum out there and one day you might have to defend yourself for real and you do not want to be left wanting when the sh*t hits the fan…