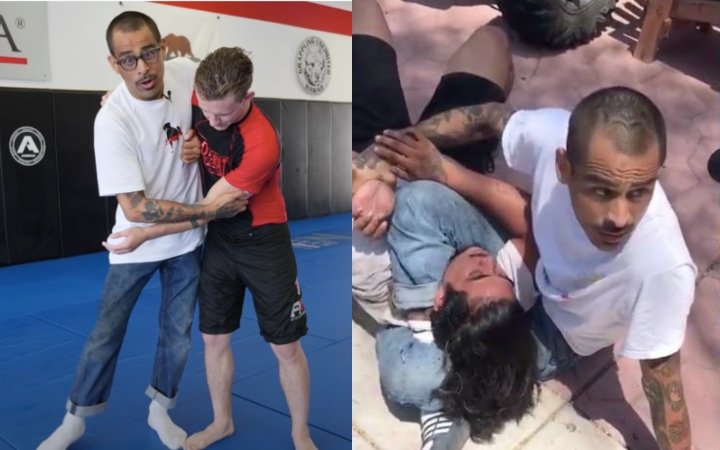 Several years ago Sergio Hernandez apprehended an alleged burglar who tried to rob his father’s house.
Sometimes burglars pick the wrong house to rob. That sometimes is when they are caught by a BJJ black belt. This happened today in San Diego, California. Sergio Hernandez, a BJJ black belt, under Baret Yoshida, caught a man trying to rob his dad’s house and put him in a triangle choke while waiting for the cops to arrive.

Now he explained away the entire incident for abc news:

“I was angry and I was upset but I wanted to make sure that I didn’t harm him to get some sort of revenge or satisfaction out of this,” he said.

“When I see people post videos of people getting punched or street fights, it always bothers me that people celebrate violence so much.”
“I’ve been doing jiu-jitsu for about 13 years,” he said of the Brazilian martial art.

“I could have broken his arm easily but I don’t like to see people get hurt. I was going to put him to sleep but I wanted to keep talking to him to figure out why he chose our house.

“I felt bad for him but to violate someone’s property like that is very dangerous. I think it would have been wrong of us to let him go because maybe he could’ve put some else’s life in danger in the future.”
“When I was younger,” Hernandez Jr. told ABC News, “someone stole my bike and the person that stole it was a minor and so my dad didn’t want to get the cops involved so he let that individual go after he talked to the parents.”

“I would like to invite him to a boxing gym,” he told ABC San Diego affiliate KGTV. “He’s young. There is still time to save him, to guide him in the right direction.”

In this video, Sergio shows the set up he used fro the triangle starting from standing: