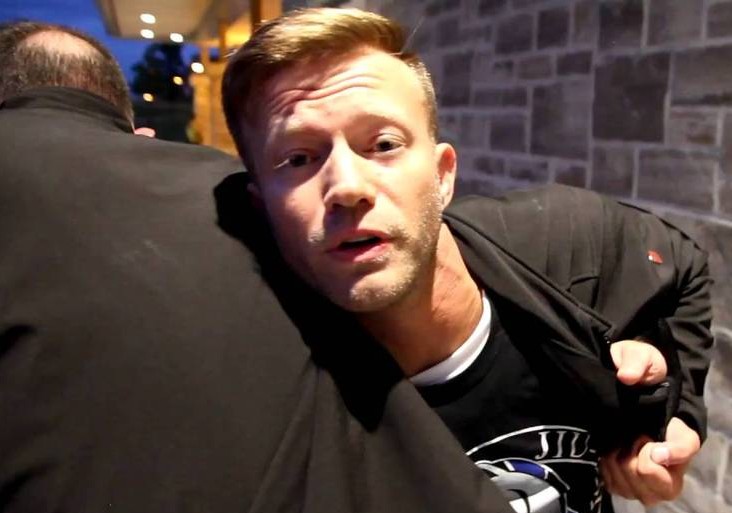 There are many videos on YouTube featuring BJJ practitioners in street altercations, and the majority of them seem to end in favor of BJJ. However, if you are inexperienced in the self defense aspect of BJJ, your chances of getting hurt dealing with an aggressively striking opponent might be higher than you expect. So what should you do if you are caught up in a situation where you are forced to take action and use the gentle art in a street fight? In an interview for BJJEE, acclaimed BJJ blackbelt and self defense instructor Eli Knight from Knight Jiu-Jitsu offers some insight on how to approach a street fight scenario.

1. Avoid confrontation: Most street-fights are actually ego fights where you are not really protecting yourself or anyone else from imminent harm, and as such can be avoided. Your ego might take a beating by not engaging, but ask yourself: Is this fight really worth getting injured for or risking legal action?

2. Situational Awareness: Simply, don’t go to stupid places with stupid people doing stupid things. This simple and rational suggestion will dramatically lower your chances of ending up in a street-fight. Take inventory of your surroundings, to include not only the atmosphere but also the people. Noticing environmental factors like the layout of the location, exits, bystanders, groups and individuals is crucial when/if you are forced into a physical confrontation.

3. Verbal Jiu-Jitsu: Asking a question to cut them off verbally, or possibly use sentences like “I am sorry,” “I didn’t mean to offend you,” “my friend just died,” “I am on medication.” Verbal deescalation along with other methods of avoidance are skills that require training, just as the physical aspect of fighting. So rather than spending 100% of your time simply repping techniques, some scenario-based training can greatly enhance your survivability.

4. Don’t underestimate anyone: Always assume that the person you’re about to get into a fight with is stronger, bigger, more athletic than you are. BJJ (or any other martial art for that matter) is not exclusive to good guys making rational decisions. There’s no guarantee they’re untrained; they may be a former D1 wrestler or a former Pan-Am Champion.

5. Recognize pre-fight cues and behavior: Is the person posturing in a way, blading his stance, shifting his weight, hiding his hands, shifting his glance or exhibiting other such behavior? These cues may indicate whether or not he will attack, as well as whether the attack is likely to be empty handed or with a weapon. This observational ability is essential in determining what counter measures you employ.

6. Multiple threats: Along with situational awareness, it is crucial to recognize if others in the environment are there with the person accosting you. Tactically, you must consider the potential involvement of others in the conflict just as you would if they have a weapon, when deciding if and how you are going to engage. Many clinching and ground grappling positions leave you very exposed to outside interference, although they may be great control tactics for a guaranteed one-on-one fight.

7. Don’t get into a slug fest!: According to research made by www.highpercentagemartialarts.com, an online resource, there is a 45% knockout rate occurring among fighters who remain on their feet compared to less than 2% getting knocked out while on the ground. And if you assume that the aggressor is at least as strong as you are, then the longer you stay in striking range, the higher the risk of you being knocked out. Staying too far from or too close to the opponent is safest when strikes are involved. And as mentioned before, controlling the person on the ground keeps you safer from high-velocity strikes than standing.

8. Engaging the enemy: Sometimes a good offense is your best defense. If all other options are off the table and you have decided you must take action, then preemption in the form of a strike, push or arm drag may be enough to create an escape opportunity if one safely exists. It may not be necessary to stay in the fight until someone is incapacitated, but rather just do enough to access an escape route. However, if you don’t feel this is a reasonable possiblity because of what you have observed to this point, then closing the distance, establishing a strong clinch and looking to get the fight to your area of proficiency is key.

9. Take the fight to the ground: While this is obviously predicated on the previous caveats of situational awareness, multiple attackers, weapons considerations, etc., the ground can be the ultimate equalizer when there is a physical disparity in a fight. From the clinch, knowing a couple of simple takedown options like trips and body-locks can get the fight into the ground grappling range that greatly benefits the person with knowledge of the positional hierarchy of BJJ. Establish the top dominant position, whether mount, side control or knee-on-belly. Top dominant positions give you ideal ability to strike, stay safer from strikes, monitor the limbs and core of the opponent and employ submissions if possible. Having trained, you should understand how to efficiently transition from position to position through sweeps, reversals, upgrades and escapes (should you find yourself in a bad position).

10. Finishing the fight: “Finishing” means getting out of the fight safely as possible and causing the least amount of damage as necessary. Pummeling someone into unconsciousness may be warranted sometimes, but causing excessive damage is problematic for many reasons. Using submission tactics for control and possible negotiation is preferable most of the time. Employing strangulation techniques can potentially be the best option at one’s disposal with the appropriate understanding and level of training. “Blood chokes” are the safest way to render someone unconscious if the ability to do so arises. And with proper understanding of ground fighting, the situation will arise.

Jiu-Jitsu as a fighting art was born on the battlefield reality-based physical confrontation. While it has changed over time, evolved in many areas and devolved in others, the effectiveness and efficiency of it still lives on. This is demonstrable in the sport and in the self-defense environment. Understanding the different considerations in how to structure your training can make you safer in every way.

Check out Eli Knight’s video in the link below: