Best Submissions Against Bigger And Stronger Opponents In BJJ 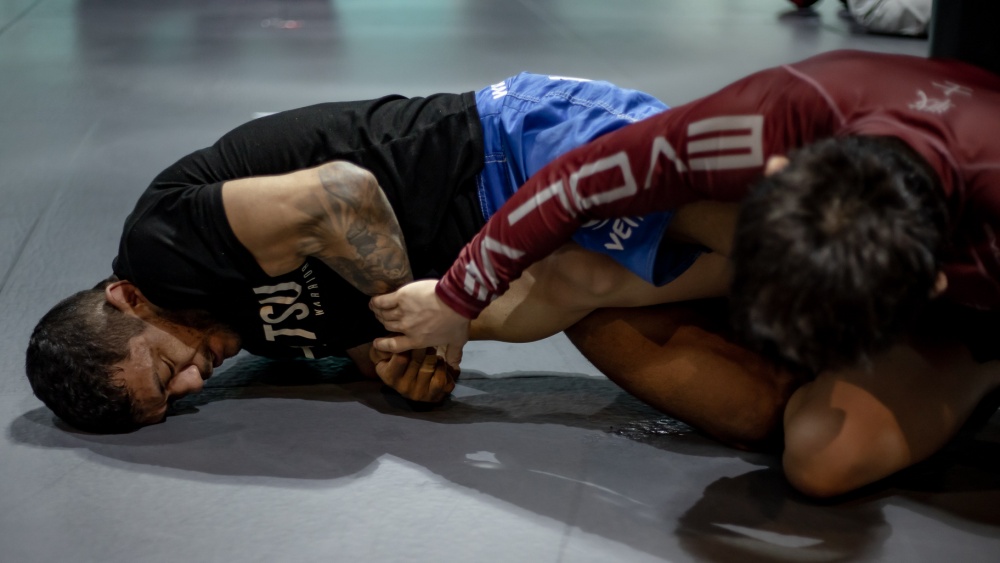 In a pure BJJ grappling match, strength and size play a significant role. There are times when skill overcomes raw strength, but there is a limit to how much it can cover the gap between strength and size. It is the reason weight classes are made.

Naturally, a bigger, stronger, and more skilled practitioner can easily defeat an opponent of a lower skill level. In a match where both athletes have the same skill level but are different in strength and size, the latter always has the upper hand. Likewise, advanced skills in BJJ can dominate a much stronger, bigger, but unskilled opponent.

In BJJ, especially in the gi, the grips play a crucial role in neutralizing the strength and size advantage of the opponent. The gi gives way to additional points of contact, such as the lapel, sleeves, belt, and pants for the bottom or smaller athletes to hold on to prevent bigger guys from passing. From there, the smaller athlete may work on applying rear submissions and leg locks.

The butterfly guard is one of the strongest guards to use against a relatively bigger and stronger opponent. It uses the strength of the lower body to off-balance the opponent, making them post their hand on the mat. It is easier for the butterfly guard to transition to a single leg x-guard to perform leg locks and go for a guillotine, which are two features that work effectively against bigger opponents.

Frames and guard retention, as well as putting the opponent in your guard as soon as you possibly can, are some of the ways to slow down a bigger and stronger opponent. It is also important to play around mismatches to gain an advantage. For instance, you should attack the opponent’s upper body with the use of your lower body.

It is difficult to finish joint lock techniques against a bigger and stronger opponent, such as the armbar. Performing an armbar to an opponent whose arms are the size of your legs is not the wisest choice, as he can easily muscle through and stack. Ideally, to finish a strong opponent with an armbar, it must be performed with the rear triangle, for example.

Some submissions most definitely work against physically superior opponents. Humans are generally stronger in the lower body than in the upper body. As John Danaher said, the asymmetry between the upper and lower body gives the best chances for smaller people to defeat bigger and stronger opponents.

Without further ado, here are the 5 best submissions to perform against bigger and stronger opponents.

One of the best examples of how the heel hook was applied against a bigger and stronger opponent was seen in the 2019 ADCC. Watch as 77kg Lachlan Giles submitted three heavyweight world champions; Patrick Gaudio, Mahamed Aly, and Kaynan Duarte, all by heel hook, in his legendary 2019 ADCC run in the absolute division to clinch the bronze medal.

The heel hook is usually not taught to a new BJJ practitioner because of its devastating nature when performed aggressively or without proper control. Heel hooks can generate unbearable pain with irreversible effects by attacking the knee’s ligaments and may take at least 6 to 12 months to recover from the severity of the damage. What makes the heel hook terrifying is that there is only a small window to tap at the time the pain is felt.

The guillotine is one of the most powerful upper-body submissions. It can be performed standing, from a closed, open, or counter-attack when an opponent decides to go for a takedown. As mentioned earlier, the butterfly guard is a good set-up for the guillotine and the snap-down, which significantly helps in the application. Bigger and stronger opponents generally go for pressure passes or leg wraps when passing the guard of a smaller player, so it is important to play around between snapping down and off-balancing the opponent.

Grand Master Helio Gracie famously said that there are no tough guys for the choke. A bigger and stronger opponent can be tough and resist the pain of an arm lock, but with the choke, he just passes out. The difference between a choke and strangle is that choking is an attack on the airway of the lungs, whereas strangling is an attack on the blood supply to the brain, blocking the two carotid arteries in the neck. It usually takes between 6 to 12 seconds to make someone unconscious, no matter how physically strong or big they are.

As John Danaher said, there are many ways to win in BJJ, Gi or No-Gi, and even in fighting, but the safest and most effective finish across all weight classes is a strangle from the rear.

The triangle is a versatile choke that can be performed in almost any position. There are different types of triangle chokes, the standard, which is done from the full guard, the side triangle, reverse or inverted, mounted, and the rear triangle choke.

The standard triangle, which is performed in the guard, opens a risk of getting slammed by stronger opponents should rules permit. The most effective type of triangle choke that works well against bigger and stronger opponents is the rear triangle choke. It creates an unfair advantage due to the position of the choke; from the rear, which is extremely difficult to defend.

The bow and arrow is one of the best chokes when fighting in gi and it works well against stronger opponents. It utilizes the advantage of the lapel and can be set up in different ways. It can also be performed as a transition after a failed attempt at an armbar on stronger opponents.

Although skills provide an advantage where strength is challenged, do not neglect your strength and conditioning as it plays an essential role in preventing injuries and your growth in becoming a better fighter as well as a grappler. When faced with bigger and stronger opponents, we should take the opportunity to not just rely on strength to fight our opponents but to test the efficiency of the skills and techniques that we currently have.

Want to learn more about submissions? Attend one of Evolve MMA’s complimentary class for more tips.