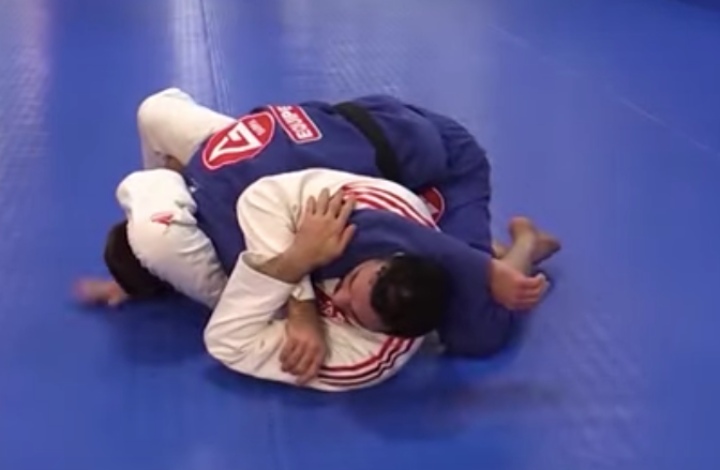 Playing defense in Brazilian Jiu Jitsu is most commonly associated with evading submissons and escaping bad positions. However, just because you’re defending yourself doesn’t mean you can’t attack – that you can’t surprise your opponents by submitting them!
One of those surprising attacks is the Triangle Choke from bottom Side Control… Here’s how to do it, explained by a multiple time ADCC and IBJJF champion Braulio Estima!

EVEN WHEN DEFENDING, YOU NEED TO MAKE YOUR OPPONENT FEEL UNCOMFORTABLE!

Before diving into the setup explanation, Braulio looks to remind everyone that, yes: bottom Side Control is a defensive position that, as all other defensive positions, requires that you to defend from attacks and to, at the same time, set yourself up for an escape.
Furthermore, he explains that there’s yet another very important subject to refer to as well: the matter of priority.

In BJJ, explains Braulio, the priority is not a submission – nor is it a pass, a sweep or a takedown… The priority is to make your opponent feel uncomfortable. This doesn’t only apply to the situation when you’re on the offensive, however; but also when you’re on the defensive! You need to make your opponent feel vulnerable in that scenario as well, so that they cannot efficiently attack you.

Having that explained, Braulio moves on to the Triangle setup.

He starts from the possibly worst position in bottom Side Control – with his hands flared out, unable to frame against his training partner. However, despite the bad position, Braulio reminds that you always want to make your opponent feel uncomfortable; and the way to do so when they’re in Side Control is by getting them away from your body. One of the ways to do so is by taking the arm which was blocking your hip and trap it between your legs, then using that position to hit the inverted Triangle!
But, how are you supposed to get that arm in there? The way you do it is by making your opponent, yet again – uncomfortable, by using threats against his position.

One of them is the possibility of being turned over, a danger which you can initiate by setting up an escape which will make them post their hand. If they don’t post their hand, well, you roll them over and escape Side Control (when doing the particular escape shown in the video, remember to „shoot“ with your hands straight so as to gain more power). If they do post, however, then their arm is in a great position for you to trap it.
Braulio does this by gripping the training partner’s arm, pushing his hips into him and then making a circle with the foot (of the leg that is closer to his training partner’s hips) across the partner’s arm and wrapping it – alternatively crossing his other leg and foot over it as well, in order to gain a stronger trap.

FINISHING THE TRIANGLE FROM BOTTOM SIDE CONTROL

Setting up the inverted Triangle from there, Braulio emphasizes that you shouldn’t stay flat on your back, but that you need to be turned to the side.
From there, Braulio pushes his training partner’s head to the hip level; all the while keeping his arm posted around his partner’s tricep, in order to block his second hand from escaping as well. This effectively keeps his training partner in place, so that Braulio can use his „outside“ leg to post it over his partner’s neck and then use his other leg (one closer to the hip) to lock the Triangle and finish it from there.

To see Braulio Estima explain this setup in vivid detail, watch the video below: