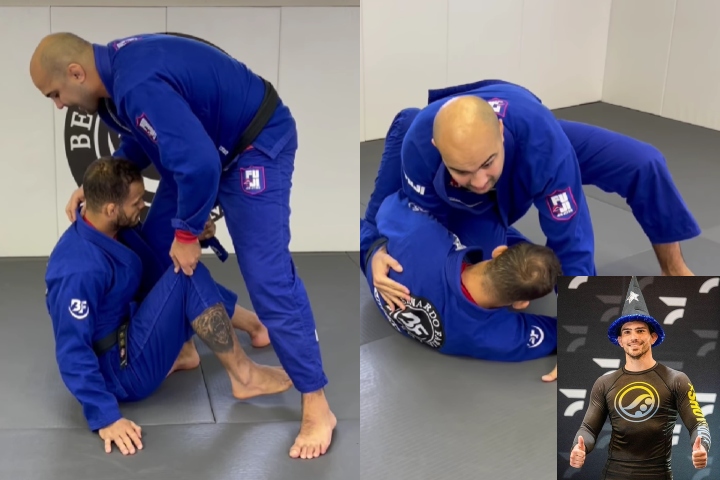 Brazilian Jiu-Jitsu is an art in motion… However, from time to time, that motion stops – as both you and your training partner find yourselves in situations where, at least for a second or two, it’s unclear what will happen next. For example, when they’re playing seated guard and latch onto your leg, gripping your lapel; they haven’t done anything yet, but you’re limited with options, too.
Bernardo Faria has recently learned a technique from Andrew Wiltse, one that will help you break out from this position and pass the training partner’s guard. Bernardo calls it “the coolest technique” he learned from Andrew.

When you’re stuck in this position, Bernardo explains that the first thing Andrew does is that he grabs the opponent’s leg. This limits the opponent’s options. Then, he grabs the opponent’s collar; behind their head, with a thumb-in grip. From there, and at the same time, he pushes the collar out and drives his leg out as far to the side as possible.
By doing so, you’ll create more space for your leg – as well as for the underhook.

Once you’ve established the underhook, go for the Knee Slice Pass. Then, when you’ve almost passed the guard, kick your knee forcefully towards your other leg, to get rid of the training partner’s lapel grip.
It’s simple to do and highly effective. Faria demonstrates this Andrew Wiltse technique on the video below: