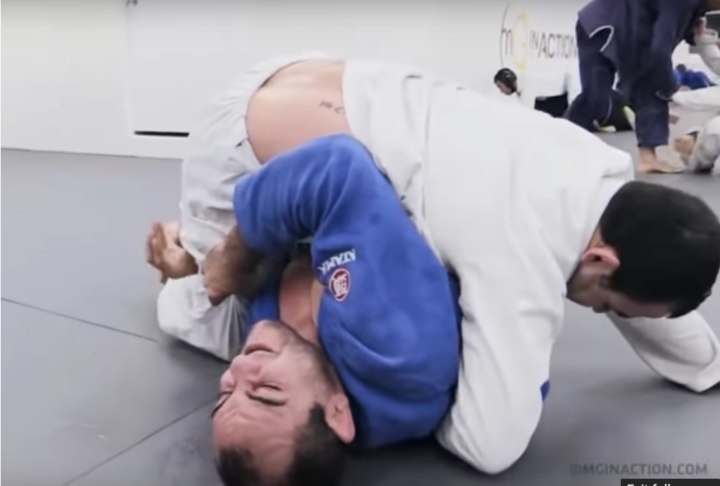 While it’s, without a doubt, important to come to BJJ classes as often as possible in order to accrue the invaluable mat time, quality still exceeds quantity in Jiu Jitsu. Those hours you spend training won’t amount to much if all that you’re doing is nonchalantly going through the motions and zoning out when your instructor explains something.
So, what can you do to make sure that your training time doesn’t go to waste? Bernardo Faria has a few words of advice.

THE GREAT „DRILL VS. ROLL DEBATE“

Bernardo starts by saying that, well, it all depends – what works for one person might not work for another. This is perhaps most vivid in the eternal „drilling vs. rolling“ BJJ debate.
He explains that, on one hand, he has seen and been in training situations where lot of drilling was the name of the game. Simply put, a lot of very successful athletes invest much of their training time into drills on a weekly schedule; with time slots in their training days dedicated solely to drills. And that seems to work tremendously well for them.

On the other hand, Bernardo points out that there’s a lot of Jiu Jitsu athletes – himself included – that don’t place so much emphasis on drilling. In his case, he had always striven to learn as much as possible about every available position, whenever he could. He did this so that he could, at the very least, recognize this position or technique being used against him in a match, and then take preemptive measures to not fall into it; as well as to filter out what’s appropriate for his own game and what isn’t.

However, even though he aimed for learning these techniques as much as possible, Bernardo emphasizes that this doesn’t mean he has spent a lot of time actually drilling them. In essence, he’d take the positions and techniques he thought would be good for his game; and then he would practice them a lot, but during rolling. That is what worked for him.

So, how you’ll learn the techniques comes down to your personal preferences. It depends on how you learn best; and that is why, as Bernardo exclaims, it’s a must for every jiujiteiro to understand themselves in this regard. This is especially true for those who compete at higher levels; but also for those that train just for fun.
But if a broader approach is taken, away from the individual training sessions and to the full schedule of training in a week... How should that look like?

Bernardo tells how it was from his experience; basically, when he was training competitively, he would have as many as 10 training sessions during the week. Seven of those sessions were allocated to Jiu Jitsu, where Bernardo would first warm up for 10-15 minutes, and then learn and drill a certain technique for around 20-30 minutes. That, in the end, would be followed by 40 minutes to an hour of rolling.
Two sessions per week were dedicated to strength and conditioning training, which would last for roughly 45 minutes; and Bernardo’s 10th training session would consist out of Wrestling practice, that would last for around an hour.

And this is where Bernardo makes his crucial point: he’d train as hard and as intensely as he could during all of these training sessions. He says that he often sees Jiujiteiros training way too lightly; this is a mistake which could be rectified by simply putting in more effort into what they’re doing.

Bernardo gives his opinion on the video below: