Benefits of Rock-climbing for BJJ 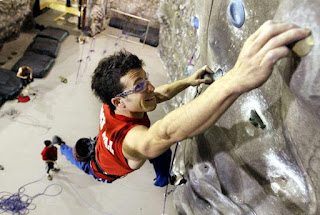 Usually when it comes to other sports that I do apart from BJJ, I practise crossfit, judo, weight lifting, swimming and cycling. A friend of mine has now invited me  to go rock climbing with him this week. Many BJJ guys I know have told me of the numerous benefits of rock climbing for BJJ. As I’m an opened minded person, I did my research and this is what I found from various articles around:

First off here are the main similarities between BJJ and rock climbing:

– Technical way to climb is shrimping upwards.
– You get insane grip, forearm, and overall pulling strength
– A lot more strength endurance, very useful for rolling
– Unlike weight training, you can climb all day long

Nicolas Gregoriades from http://jiujitsubrotherhood.com/ has this to say about rock climbing for BJJ:

“At this point, I have found no better compliment to my jiu-jitsu training than climbing. The improvement in grip strength alone is worth the effort. After about 6 months of rock-climbing once per week I noticed a major increase in my forearm and finger strength.


A study on bone density between two control groups, one of weightlifters and one of rock climbers, found that the climbers had far higher levels of bone density. Obviously, increased bone density is invaluable to a jiu-jitsoka.


Climbing enhances strength, balance and weight distribution. What more could a jiu-jitsu fighter want? It’s fun as hell too.


All in all it looks very promising. I have trained BJJ with some rock climbers in the past and what I could remember was that they had a very strong grip and were very flexible. I’ll keep you guys posted. OSSS!