Bas Rutten on Brazilian Jiu-Jitsu’s Effectiveness For Self Defense 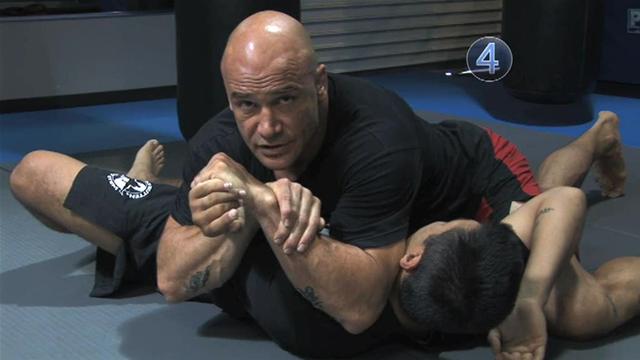 Bas Rutten is a Dutch retired MMA legend, Karate and Taekwondo blackbelt, and Muay Thai kickboxer. He was a UFC Heavyweight Champion, a three-time King of Pancrase world champion, and finished his career on a 22 fight unbeaten streak (21 wins, 1 draw). He is currently the star of Punk Payback on Fuel TV and co-host of Inside MMA on AXS.TV.
As a professional fighter, one of his favorite tactics was the liver shot (both punch and kick), and he popularized its use in MMA. Rutten is known for his charisma and has capitalized on his celebrity status since retiring from fighting in 1999. He has worked as a color commentator in several MMA organizations, including Pride, and has appeared in numerous television shows, movies, and video games. He also coaches MMA and has authored several instructional materials.
One of his biggest regrets is that he never faced the mythical BJJ and MMA fighter Rickson Gracie.

“Rickson Gracie. At the time every one was saying he was the greatest so I actually challenged him. People twisted the whole thing and tried to say it was because I didn’t like him. But I had nothing against him, I just wanted to find out who was the best.

At the time of Rickson’s peek, every top MMA fighter wanted a piece of him. He was supposed to fight Kazushi Sakuraba in a mega MMA extravaganza but the same year Rickson’s son Rockson passed away and that was the end of his fighting career.

In the past, Bas Rutten has been critical of BJJ’s effectiveness for self defense and even for MMA. From this interview:

Bas recently answered a fan’s question on his Facebook page regarding BJJ and self defense. Check out his answer:

” Question from fan, this is like the 8th I get about this, I answered a while ago on one of the posts, this time I figured to post it so that you can read it as well
QUESTION:
I have been hearing about your amazing work with Judo, Catch Wrestling, Jujitsu and I need your help.
I have been studying Mauy Thai for 3 years and I want add an good grappling art for real life street self defense.
In your expert opinion which good grappling art offers real life street self defense ?

ANSWER:
I would say BJJ with and without a Gi would be good. Of course you don’t wanna end up on the ground with friends of the attacker trying to kick you in the face, (that’s what people always say, and that’s why they say it’s “not good for street fighting” but that is of course BS)
Just understanding leg locks and all other locks is very important, in a street fight you can submit somebody really fast (if he doesn’t know the ground) so even when his friends are helping, its ALWAYS better to have ground experience as well. A good grappler doesn’t have to really look to slap on submissions, meaning, he can keep an eye on the other guys, make sure he keeps his opponent between him and the other guys and go for a submission, when he has the submission, break whatever submission he has so that guy can’t fight anymore or with less “weapons” (like one arm or one leg only)
For the people who say BJJ is not effective on the street I say: “What if you trip and fall on your back, you don’t think it’s better to understand the ground game? Of course it is, because like I said, you can simply trip and fall.
I give you an example how it helped me once:
I was fighting three guys one time in Holland, one broke a glass on my head so I was bleeding profusely and felt my neck get warm, I felt what it was and I saw my hands were full of blood. So my thought was “OK, he has me, but I am going to return the favor”. So I grabbed him in a Thai clinch and pulled him forward and slapped a guillotine choke on. The other guys were trying to hit me, but I simply kept the guy in between myself and his friends and just deflected their punches with head movement and my shoulders (You don’t need to look at the person you are choking you since you have done this many times in training) When he fell down (was choked out) I kicked him first in the head (I had like 39 stitches in my head afterwards, I was pissed) and than I fought his buddies.
Without grappling training I wouldn’t have known this. Also when somebody grabs you from the back, front, side, anywhere, “standing” you can still do a whole bunch of submissions, and quick ones that can dislocate shoulders, break arms etc
But if you want to keep it simple, best thing for you, since you are a Thai Boxer already, go wrestle, so they can’t take you down, and even when they are better on their feet than you, you can take THEM down and go for G&P. Train for the G&P though, so that you can make quick work, because again, when his friends come to help him you don’t have a lot of time there
This is what I always say, “It’s better to know and don’t need it, than to need it and don’t know it”
When you train in BJJ with and without a Gi, focus a lot on reversals, in street fighting that’s pretty important
Godspeed!
Bas “