Josh Barnett: ‘I Was Awarded a BJJ Black Belt & I had NEVER Trained BJJ’ 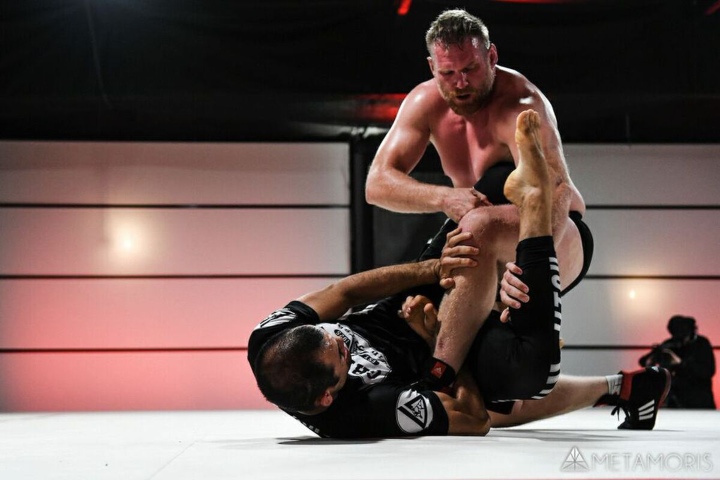 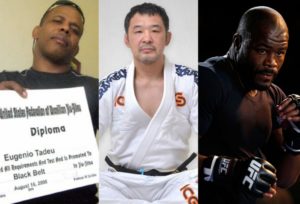 “Yes, I have a BJJ Black Belt, But it’s not what you think.

First off I don’t train in BJJ, I almost never put on a gi (Only to teach or help Erik assist), and I stick by my training in Catch Wrestling and it’s concepts. When I step on the mats of Metamoris or in the UFC cage, I am walking in on the back of my Catch Wrestling style. I don’t practice a bunch of guard work, sweeps, or limit my submission work to any BJJ derived conceptual rule base. I don’t do BJJ. Period. However…

In 2009 Erik Paulson, endorsed by Rigan Machado, presented me with a Black Belt in BJJ. I was Incredibly surprised and a bit shocked, see I have never, NEVER trained in the art of Brazilian Jiu-Jitsu. I didn’t start out a simple white belt and work my way up the ranks and eventually grind into a black belt. But there is a method to the apparent madness here.

I can’t say I was entirely unfamiliar with the gi or Kimono as it is also called. When I was a freshman in high school a coach and mentor of mine directed me to train in Judo at the Budokan Dojo in South Seattle under Burt Mackie and John Schaedler and I spent around a year and a half training there. It was there I first learned about the guard/bottom scissor position. I continued doing Judo training with Sensei Jim Harrison at his Bushidokan Dojo in Missoula Montana while I attended university. From there I hardly ever donned my Judo gi except for very rare occasions at AMC Pankration when we would put them on to wrestle with as a training variant. When I say rare I mean a handful of times over the 8 years I was there. I wouldn’t wear a gi again until 2009, showing up to compete in a no-gi tournament and having it all changed to a gi tourney upon my arrival.

I approached the promoter and said I was here to sign up for the no-gi tournament and he gave me a surprised look. I asked who else was here to compete as I was curious which of the gi guys that were grappling at the moment were going to do the no-gi absolute. He responded “We’re not sure if it’s going to be gi or no-gi.”

And I piped up right away, “That’s not what it said on your flyer.”
“Well…give me a minute.”

He went to gather all who would enter the absolute and brought us close in off the side.

“Ok, we have decided we are going to take a vote.” he starts. “Who wants the absolute to be no-gi?” Alone, I raise my hand.

“Ok. Who wants in to be gi?” and the rest of the group raises their hands with one even looking right at me and saying “Sorry bro! I just want to increase my chances.”

I was lucky enough that Break Point was there and was willing to sponsor me with a gi right on the spot. Since I had never trained BJJ I had no real ranking and this was supposed to be a “Black Belt Absolute” division. I had won the no-gi worlds previously in the Black Belt division but still, I didn’t do BJJ so I technically had no rank. I tried to get a white belt to compete in and some of the tournament staff said there was no way that was going to happen. So Chris Hauter belts me a Black Belt honorarily for the tournament, I warm up with some uchikome on my buddy Victor and I am ready to go. I lost in the finals in a controversial referee decision but I didn’t get up in arms over it since my philosophy was if I didn’t tap them then I couldn’t get mad at the results. The brackets were filled with high level, world champion guys and I proved that putting a jacket didn’t prevent my ability to wrestle and be successful.

After all that Coach Paulson would have me teach a gi class at CSW here and there where most of the time I would run them through ukemi, a couple nage-waza and perhaps one submission. He would try to catch me off guard sometimes and challenge me to do something in the gi like, “Show me 10 chokes right now!” or attack me and roll a little. Even though I had never trained BJJ I understood the concepts without any trouble and could apply skills and techniques with or without it.

With Rigan Machado’s endorsement plus Erik’s knowledge and testing of my abilities and my performance in the gi, Erik Paulson awarded me my Black Belt and made me his first Black Belt in Brazilian Jiu-Jitsu. I went from zero to Black Belt in BJJ without training the art specifically. My knowledge of Catch Wrestling, Judo, body mechanics and basic universal principles as it pertains to unarmed combat 100% allowed me to put on a gi, compete in a specific rule set and succeed.

Now you may be thinking that that me makes me some kind of illegitimate BJJ Black Belt and I am Ok with that. I don’t train BJJ. I have not taken one BJJ class. In fact, as a matter of point I intended to never have any ranking in BJJ or to train in it because of all of the arrogant comments and dismissal of my skills I had received from BJJ guys over the years. When I was starting at AMC and BJJ guys would come through to train they’d always ask “What belt are you?”. Our response was always “none” because we didn’t train in it and you should have seen all the smirks, eye rolls, and slights we would get. As if because we didn’t do BJJ we couldn’t be any good at grappling. It was incredibly insulting. Then you’d tool them up and then you might get, “He’s got good leg locks.” but with an unsaid “But…”

But indeed. I still get some of that but I can’t be wrapped up with it anymore. I am more interested in putting my techniques, concepts, and promoting Catch Wrestling through results. Rigan Machado and Erik Paulson vouch for my abilities and for them I am proud to say I am their BJJ Black Belt. I am glad to honor them and their teaching and works. I am proud to say I represent them and that is why I was willing to accept such a high award from some of the best in the world. And for them when necessary I will break out my black Break Point gi (Covered in heavy metal patches of course), tie on my Black Belt, and stand tall to represent for my teachers and any who just love to get on the mats however they choose do so.”