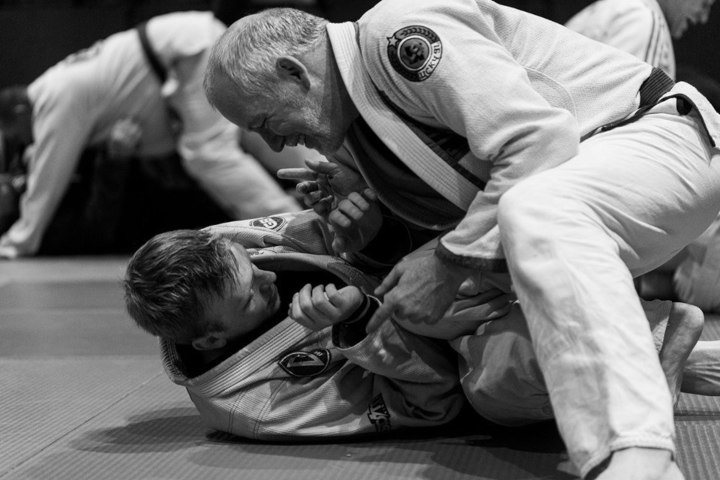 In July 2013, I attended my first seminar on Jersey island with Braulio ESTIMA. At that time, I was a brown belt and pretty good in attack and defense. My only real weakness was my English … I understood it pretty much but I could not speak it. At the end of the seminar, I was trying to explain to a guy, to put himself in a turtle position to defend himself, without knowing how to say it. So I told him : “Your hands and legs are sisters, your brothers’ are your arms and feet, your elbows and knees are your cousins, your head is the father and you have to keep all the family together”. It worked. I was happy with this explanation and I began to use it afterward.

A few months later I received my black belt. My BJJ improved my defense and my attack as well, but also my pass and my transitions. I had two goals for each fight, keep my family together and separate my opponent’s family.

Little by little, when I traveled, I shared this concept.

In 2016, my friend Uyi, Roger Gracie’s black belt, loves my concept and asks me “Where is the mother?”. I’m stunned, I had not thought about it before … I answer him “the mother is the neck, the throat. The whole family must protect her but she is the one who commands. Without her, the father does not move!”. My concept evolves and I realize that it’s universal. In each country and each culture, the value above all, is the family. Everyone can understand it, even children.

In 2018, my friend Rob STAPLES trusts me to open the first day of Gracie Barra Channel Island summer camp. To express gratitude and as this has been a key point in my BJJ progression, I did my first seminar on my “Keep The Family Together” concept. I closed the loop.

In addition to this concept, I use others, such as: finding a way to breathe, control by pushing and pulling at the same time with equal force, being the first to act, being the second to be first, head controls the body BE* (Braulio Estima), SMS (Stability, Mobility, Security) CD** (Christian Derval RIP), use the ever-increasing pressure, prevent what is known that will happen, set a danger alarm for the family member who is exposed, control space (reduce it by attacking and create it while defending), always think of the strikes and keep a good posture…

When I pass the guard and take lateral control or mount, I separate the family from my opponent: the big sisters from the big brothers. It’s the beginning of the end. I must continue to separate the family by attacking a big brother, the mother or the father. My opponent must protect his family by doing everything to regroup. It works for most positions, closed guard, half guard, back, butterfly guard, etc…

How to separate your opponent’s family:

In half-guard for example, the person on top will seek to free his knee, to take the underhook and control my head to flatten me back. Then, his position is strong and he can start passing the guard, take a stronger position or attack.

I know what will happen so I must protect my family before the danger is too big!

For this, I must avoid my opponent’s progress, so I put myself on the side. I keep my big sisters (legs) tight on his leg and my big cousin (the knee) in opposition to his hip. This keeps me off the pressure and creates space. My big brothers (arms) are placed in opposition and my little sisters (hands) come on the shoulder and biceps of the opponent to protect my father and mother (head and neck), to avoid a punch or headbutt. The opponent is then too far to take the underhook and to lay me flat on my back. I am safe and ready to attack!