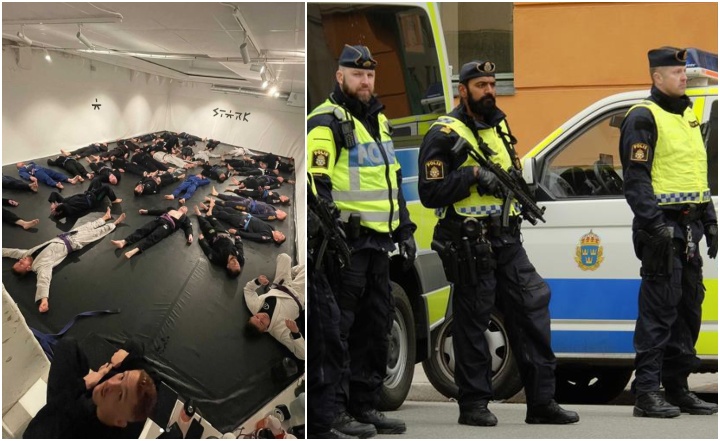 A Brazilian jiu-jitsu academy in central Stockholm was subjected to a suspected arson attack on Thursday night.

A person was seen smashing a window to the club, after which the room started to burn and the person fled the scene by car.

Many in the residential building spontaneously evacuated due to the strong smoke development.

“Someone smashed a window and threw in a can of petrol and a torch so that the whole room burned down,” says Max Lindblad, who runs the jiu-jitsu academy Stark.

At 11pm on Thursday, the police were alerted to the residential building on Norrtullsgatan near Vanadislunden in central Stockholm.

– It is a suspected arson in a sports hall, says Daniel Wikdahl.

This is the club “Stark jiu-jitsu” who moved into the premises this spring and recently won three world championships during the championships in Abu Dhabi. They are former members of long standing BJJ academy Prana Jiu-Jitsu (situated close by), and the Stark location is situated at just 150 meters from the world famous All Stars MMA Academy where MMA stars Alexander Gustafsson, Ilir Latifi or Khamzat Chimaev all train and there is also a Checkmat BJJ academy under Alan ‘Finfou’ Nascimento at All Stars.

Have you had any threats against you?

– No, not that I know. It sounds strange in case someone would like to approach us in this way.

Thanks to witness statements, the police know how it happened.

– A person smashes windows to the sports hall, which is some form of basement in the residential building, and then starts a fire, says Daniel Wikdahl.

– There was quite a strong development of smoke and many who live in the house must have evacuated spontaneously.

After the person had lit a fire on the premises, he fled in a car. By 11pm on Thursday, the fire had been extinguished, but there was still a large crowd with police and rescue services at the scene.

The police have initiated a preliminary investigation into the arson.

“Thursday evening after 22:00, someone broke the window to our academy, threw in a gallon of lighting fluid and lit it on fire. This happened when no one was there, thankfully, and the building with all the families living above the academy are all ok. There is an investigation pending for attempted arson and many witnesses are cooperating with the police.

We are all very chocked and convinced that this is an attempt to hurt our academy and our brand. We have grown very fast and gathered a lot of people, believing very strongly that we can create the best possible positive environment for competitors and non competitors alike and attracted a lot of members. We know we are doing something that is unique for the sport in Stockholm and we knew that it would upset people. But this is beyond anything we ever thought would be possible to experience in the sport in Sweden. We are working our best to find out more how we proceed with the insurance companies and the police to rebuild everything we built with our instructors and members.

Now, we want to gather funding to rebuild and grow as quickly as we can. We need to find a place to train and gather the kids and adults in our academy to not be scared to inaction by this attempt. We appreciate any donation you can spare.”

They have set up a Gofund me account in order to rebuild the academy.