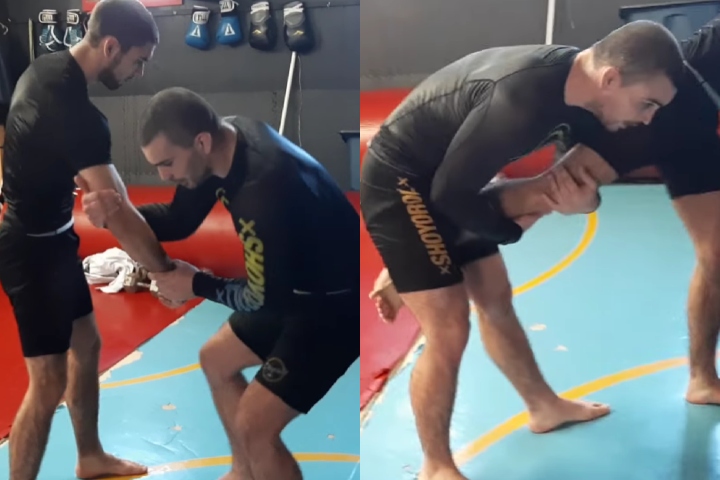 All takedowns are made equal… But some takedowns are more equal than others – especially if you have no wrestling background. That is to say: if you want to become comfortable on your feet, even against wrestlers, then you need to select and practice a handful of takedowns and takedown setups that will give you the edge.
One of those takedown setups is the Armdrag. Especially if you’re using it to set up a Single Leg. Here’s how Andrew Wiltse does it – in a no-nonsense sort of way.

If you’re going for an Armdrag, you first need to understand that this entails pulling the arm across. In other words: don’t just take the arm and pull it towards your same-side hip. That wouldn’t be a good idea… Instead, pull it across to the far-side hip and immediately drive towards your opponent with your hips in order to take full advantage of the momentum.
As you establish the first part of the Single Leg entry, your next step is to scoop the opponent’s leg with your own and with your arm, while stepping back. This lowers the chances of your opponent slipping out and of putting pressure on you.

From there, you can go for a Single Leg takedown variation that works best for you. Watch the video below to get more Armdrag details from Andrew Wiltse, as well as to learn how to set up fake Armdrags: