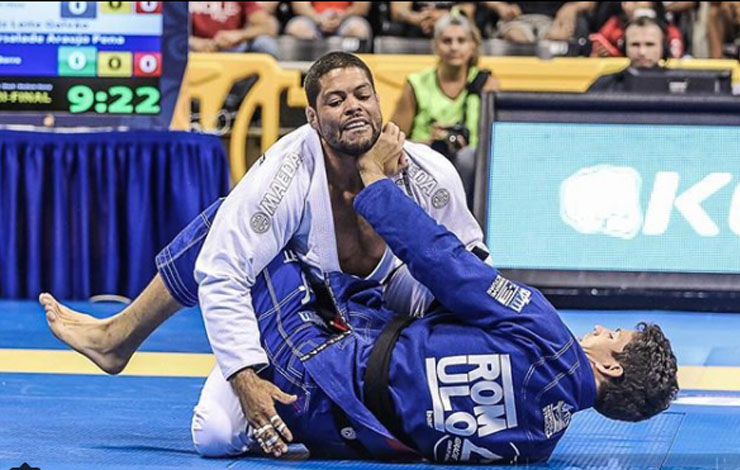 Andre Galvao is one of the most impressive competitors of all time. The Atos headcoach and ace recently released an interesting video titled “HALF GUARD PASSING SECRET!!!! Atos Jiu Jitsu HQ Techniques”.

Even though the description for the video is much less glamorous our attention was peaked.

This is to prevent many difficulties that arise when you let your opponent block you with arguably one of the strongest parts of their body – legs.

Galvao recommends doing with this type of half guard by grabbing on the lapel and by pinching your own knees together as to trap the leg of an opponent.

Galvao also recommends not pinching on the thigh but on the calf of the opponent as to prevent any reguarding possibilities and leverage.

That also enables you to put your own leg over actively creating a windshield.

From there you can control the bottom leg really well .

This is where we have to deal with the knee shield on the chest. Grabbing the knee shield leg lower enables you to stiff arm and open the leg. But this is still an arm vs a leg competition that’s not really a good equation.

This is why Galvao recommends using a little pressure trick by utilizing your body to get his leg to respond in a way that it would be easy to pack up and stiff arm.

Here you would have an easier time passing to side control. While it seems obvious to beginners to pass to the side you’ve opened this is also most obvious and somewhat easier to defend. This is why Galvao uses this as a misdirection and passes to the other side.

To check all this out plus plenty more details press play below: