An In-Depth Look Into Judo Leglocks 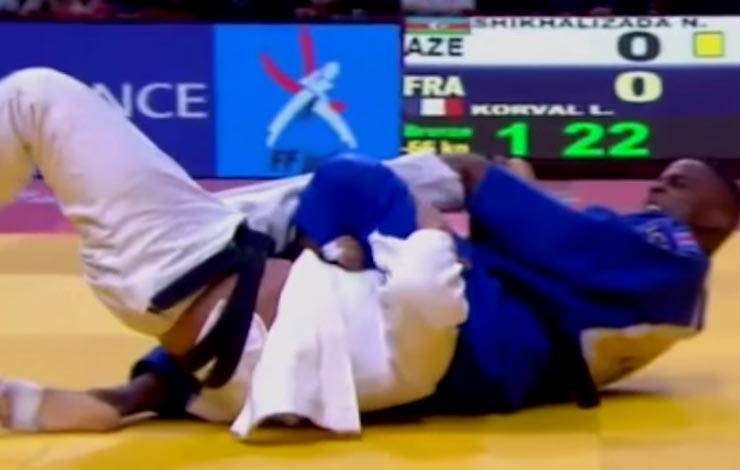 Leglocks have been steadily getting more popularity in bjj culminating with all the success of Renzo Gracie’s NY Academy students. Still John Danaher recently shared a pretty scathing review of what leglocks used to be looked as:

“Leglocks fit into the system in only one way – when the system has failed.”

But is it really so, we take a look at some leglocks from judo as the older brother of bjj:

Ashi-Hishigi is a japanese name for the achilles lock aka an ankle lock. As such it was described in The Canon of Judo by Kyuzo Mifune: 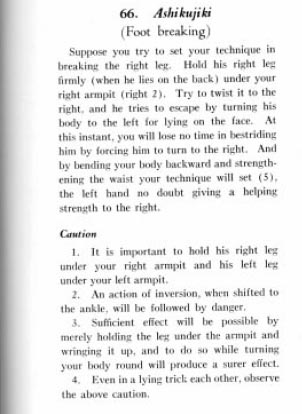 In an old book, written in 1951 by J. Dick Schilder (“Judo Art of Self Defence”), there is a step-by-step explanation of a techniques called “Ryo Ashi Hishigi”, a double leglock which looks very much like pro-wrestling’s “Boston Crab” technique.

Learn How To Set Up and Execute the Boston Crab Submission 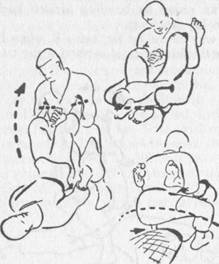 Next up we have Ashi-Dori-Garami an entangled leg dislocation – in bjj we call it a toe hold.

It involves using the hands to hyper rotate the ankle grabbing the foot near toes and twisting or pushing while controlling the leg in question.

Uke’s right knee may be pinned under tori’s left arm. But tori runs the risk, if he raises uke’s leg too much, of allowing uke to pivot to his left. It is in spite of everything pretty difficult, and tori can still “link up” in a manner somewhat similar to the 1st leglock: B, i.e. by turning himself towards the back this time and straddling uke with his right leg.

Next up we have Hiza Hishigi aka a Calf Crush.

Uke is on his stomach. Tori is on the left of uke’s left leg, his right knee on the ground and his left knee raised.

With his left hand tori grasps uke’s right heel by the outer edge and pulls on it so as to place uke’s right instep in the popliteal hollow of his own left knee.

Immediately tori with his right hand, which has just taken hold of uke’s left instep from below, bends back uke’s leg on uke’s thigh as he strongly presses uke’s right foot by the heel in the fold of his left knee which strains the joint.

Then there’s something peculiar – which you may have seen on instagram at one point or another. It is a dislocation of the knees from mount called Tate Shiho Hiza Hishigi

Tori mounts uke, he grapevines his legs and egages the feet against inner surfaces of uke’s heels. His insteps are on both sides in contact with uke transversally.

Tori extends his legs sparating them and raises them as supports himself on uke’s stomach. 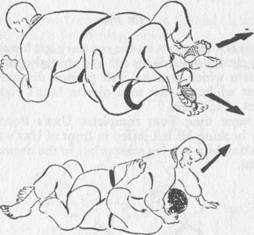 Then of course there’s Ashi Makikomi

UKE pushes TORI strongly backwards; TORI puts his right leg behind the right leg of UKE (see Judo throw O soto otoshi), so that both knees are in contact, accepts the pressure to the rear to and is falling backwards, here he pulls UKE with his right arm, while his left arm pushes UKE to the right; TORI’s right shoulder is always in front of the right shoulder of UKE. At the same time TORI hooked his left foot before the instep and the side of the back of the right ankle (Achilles tendon) of UKE.

The moment while TORI reaches the ground; a little before UKE (Sutemi principle), he turns toward its right side. With his left leg as a fulcrum TORI interspersed with a turn to the right before UKE, which lies on the abdomen; TORI draws with his right arm to the back, with his right lower leg still, as in the state, in the right knee of UKE. TORI attacks with his left hand UKE’s right instep and prevents the lower leg in the direction of UKE’s thigh. The lever has an immediate effect on UKE’s knee.

COMMENT:
The final position and the lever is in line with the leg lever Hiza hisigi. Important in this technique is that TORI ensures that UKE “flat” on his stomach comes to rest. 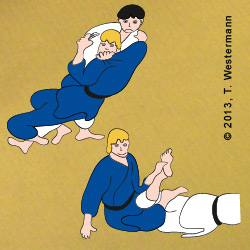 Next up – Kani Garami: This is a leglock off of a scissor throw.

Uke falls flat on his stomach and tori then effects exactly the same end of the movement as for the preceding leglock.

Then there’s Ashi Kannuki which is essentially a leglock off of lockdown:

One interesting tidbit is that a judo instructional typically cautions about a great counter for someone utilizing the lockdown: 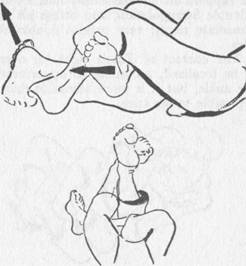 At this moment tori slips his right leg under uke’s calf as he lowers and stretches his left leg stiffened, with the foot always at a right-angle in order to prevent uke’s from extricating itself.

There are thus at one and the same time very painful compression of the calf and elongation of the ankle.

Remark: tori must prevent uke from raising himself and with greater reason from standing up entirely, since it would then be tori who would be victim of his own hold, his legs entangled round uke’s ankle.

Then there’s Hiza Tori Garami. This is basically that cautionary tale about crossing your legs in front of an opponent when in back mount. 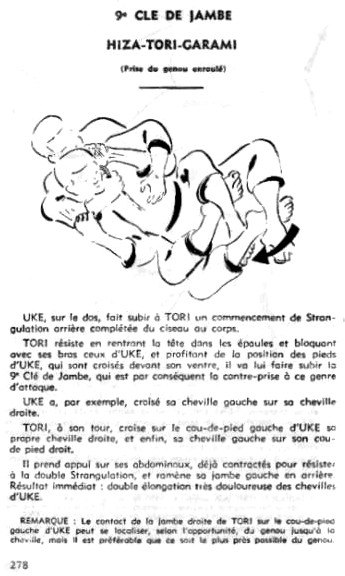 A kneebar (also known as legbar, kneelock or hiza-juji-gatame) is a leglock that can hyperextend the knee. The basic kneebar technique is similar to that of an armbar.

Tired of getting trapped in today’s Modern guards? 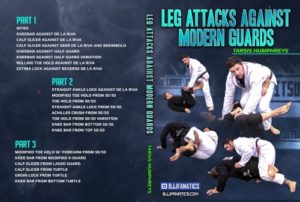