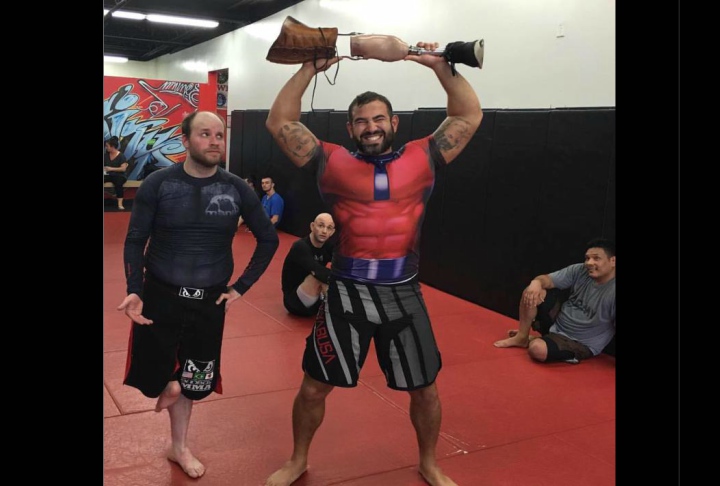 Like it or not, there are some people who you’ll come across in your life, that are simply – jerks. You’ll come across them in BJJ as well. And there’s not much you can do about that… But what you can do is make sure that you aren’t a jerk as well; that you behave and treat everyone on the mats properly.
For that reason, here’s a simple guide to not being a jerk in Brazilian Jiu Jitsu.

SLAP AND BUMP BEFORE ROLLING

Okay, first of all – don’t be one of those people who go for it immediately when the match starts. Instead, slap and bump first. It doesn’t matter if it is in training or competition; if you don’t do this, you’re going to be considered a disrespectful, opportunistic prick.

LET GO OF THE SUBMISSION…

… When your training partner or opponent taps out. Don’t hold on to it unnecessarily, as this could cause injuries. Just let go when they tap out, you’ve got your win.

Seriously though, if you celebrate after getting the tap in training, you’re a jerk par excellence. It doesn’t matter who, how, and how many times you tapped them; be humble about it. Slap and bump, then go at it again.

DON’T BE A BRUTE

Look, if you’re cranking someone’s neck, twisting their nose with your palm, shoving your forearm into their neck, or body triangling the heck out of their ribs in training – you’re going to have a lot more enemies than friends. Just don’t do it, there’s other ways to set up a submission.

DON’T GO HARD ALL THE TIME

There’s nothing that speaks „lack of control“ and „insecurity“ as loud as going at 100%, all the time, in training. Dude, chill – you don’t have to counter your training partners with full resistance for training to be beneficial. Step off the gas pedal for a bit.

DON’T COACH OTHERS WHEN ROLLING

When you roll, especially if you’re a lower belt, don’t coach others. Sure, you can give them a tip or two, but don’t overdo it.
You’re not a coach. But you are being a jerk to your coach, if you do this.

DON’T BE THE „ASK ABOUT EVERYTHING“ JERK

Curiosity is great, and it’s fantastic that you want to learn more! But please don’t be obnoxious. Don’t overdo it with the questions, neither during technique demonstration nor during rolls. It will all be revealed to you with time; and besides, even if you were to ask all the questions at once, you wouldn’t be able to retain the answers to them for more than a millisecond.

HAVE SOME HYGIENE ETIQUETTE

Shower, if possible, and definitely brush your teeth before training – don’t stink. Trim your nails regularly – so that you don’t slice someone. If you have ringworm or any other skin condition/infection – don’t come to training.
Have and follow basic hygiene etiquette, so that you’re more pleasurable (and safe) to roll with.

TREAT YOUR PROFESSOR WITH RESPECT

This one goes without saying, but it’s always worth mentioning: treat your professor with respect in training. At all times. Even if you’re really good friends outside of the academy, while you’re training – he is your professor. Be respectful to him. No excuses.

And finally, don’t be obnoxious about Brazilian Jiu Jitsu on your social media. That is, don’t post about it every day, and (especially) don’t post pictures from training all the time.
We understand that you enjoy Jiu Jitsu. But show that on the mats – don’t shove people’s faces into it on Facebook and Instagram.