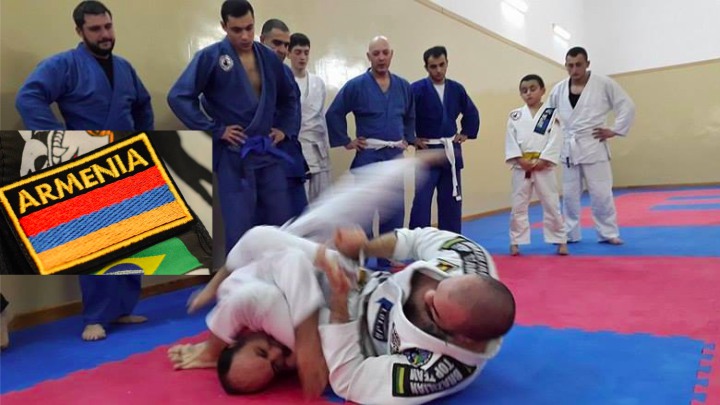 2016 wasn’t a good year for Gustavo Caetano. After dealing with some life hardships, the brown belt under BTT’s Diego Gamonal decided he would take some time off while using jiu-jitsu to help others. After 10 years of training, he had witnessed jiu-jitsu working its transformational magic many times. Always for the best. So he decided to leave his day to day life behind for some months and started looking for some place in the world where jiu-jitsu was needed.
That’s how BJJ Ambassador was born. The idea is to make it an ongoing project to connect places needing jiu-jitsu with people willing to go teach it for free.

For his first mission, Gustavo began asking around in BJJ forums. At first it looked like he was going to Ethiopia, but the idea failed when the guys in Addis Ababa lost their place to train. Then he got an invitation from Andre Harutyunyan, to go and help teaching in Yerevan, Armenia.
Andre has been training BJJ for 4 years now. He started training with a friend who did sambo and they were essentially learning from Youtube videos. After a while he met Vahan Tadevosyan and Ruben Miribyan, both blue belts at the time. Vahan and Ruben had been training under the supervision of legendary Roberto Atalla, whose seminars they were attending.

Nowadays Armenia has a small but passionate BJJ scene. As far as we know, there are around 25 guys training in Yerevan, both in Vahan’s gyn (now a brown belt) and Andre’s (now a purple belt). Despite that, the sport isn’t still widespread in the country. They have no competitions, for instance. The only BJJ medals in the country belong to Ruben’s son, the talented 11 years old Karo Miribyan, who got them competing in Abu Dhabi.
Eventually they will be visited by other BJJ players, like Roberto Atalla himself, Edwin Najmi, Aj Agazarm, Marcin Polczyk and Masafumi Matsumoto, but usually, if they want to make contact with the BJJ world scene, they have to go out, which is expensive.

Thus, Gustavo’s visit can help Armenia’s jiu-jitsu not only by the classes he’s teaching but also by helping the guys spreading their word. Gustavo says he hopes his jiu-jitsu can help hist hosts learning something new, but he emphasises their skills are far from being basic. “These guys are ready for competing in any national level competition in Brazil. I’ve seem very good jiu-jitsu here”, he said.

More importantly, Gustavo hopes a Brazilian’s presence can help spark more interest in the sport and hopefully attract more practitioners. “It’s always hard to make one new sport grow roots somewhere, but I really believe BJJ has the power to make you fall in love with it. Just give it a chance”. He stresses what he thinks is the most important aspect of the sport: its social transformation power. Jiu-jitsu can be a means of helping people have a better, cleaner and more disciplined life, and that’s what drives Gustavo to keep his project going.
After one week in the country, BTT’s brown belt is very excited with what he has seem. “I came expecting to build something, but I found there was a very solid structure already in place. Atalla, Vahan, Ruben and Andre really deserve all the credit”. Before he gets back to Brazil, he plans to train the guys to fight their first competition, IBJJF’s European, in Lisbon. “I’m certain they will be ready to compete and bring some medals back to Armenia”. Their biggest issue right now is money, since many of the guys can’t afford the tickets. The project is only happening thanks to Todos gi company and www.lolja.com.br, who helped paying for Gustavo’s trip, but sponsoring for fighters is still something they are still looking for.