A black belt is a white belt that didn’t quit! Pressure And The New Belt 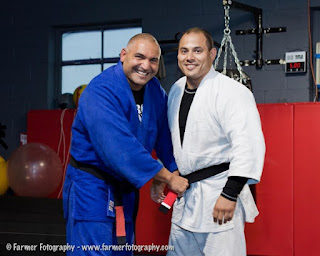 Jiu Jitsu is a simple process stripped of the typical BS of the “traditional” arts (for now); you train long and hard, you improve, you get a new belt then repeat the process until you are a black belt. Simple, right? Or is it?

You have heard the phrase ‘invisible’ Jiu Jitsu for pressures etc of the techniques that you do subconsciously but they are other ‘invisible’ elements of Jiu Jitsu that aren’t as helpful.

I understood how the belt system worked but no one told me with each new belt comes more responsibility, a bigger target on your back and worse of all, pressure. At a time when you should be giving yourself a huge pat on the back for improving to the point that it is recognised by your instructor instead you are about to hit a downward spiral if you are not careful.

If you let any negative thoughts in then you will start to question in your own mind whether you are ready to be promoted, you will put extra pressure on yourselves to perform which can actually hinder your performance and worst of all, you will stop enjoying Jiu Jitsu.

I will use myself as the example, use my thoughts for the analysis and show you that if I can beat it, anyone can.

The background is that we travelled to the USA in June 2009 and as always had gi and trusty brown belt packed with me to take advantage of the infamous Garage sessions when we stayed over with the Haueters.

I taught a class on the Thursday night and ended sparring with a really strong brown belt, he attempted a triangle but didn’t quite have it in right but pulled down on my head so hard I felt my neck pull, not wanting to risk injury because of ego I tapped and called it a day.

The next day we went over to San Pedro for the open session at Harbor Kickboxing where Chris was teaching. Had an awesome session and towards the end I was paired with Justin, a big brown belt. He pulled guard, reached over my shoulder and pulled my gi right up exposing my back then the next thing was a massive WHACK where Haueter had hit me with my new belt. He threw the black belt to me then put me to train with Tony Pacenski who kicked my ass but showed me how he kicked it too.

We finished training then went to Redondo Beach Cafe where the promotion started to hit home. I was being congratulated on a job well done but already I was starting to question in my own mind if it was too soon.

Ok, fast forward to the part where I have the thoughts and deal with them;

“It’s too soon, I’m not ready yet” – other than being disrespectful to my coach by questioning his judgement, I don’t think you feel ready to be a black belt. I started training do-it-yourself BJJ in 1994 after watching UFC2 then expanded to take in seminars and started to put it all together. I met Haueter in 1997 and really got into training. By 2009 i had been involved in BJJ for 15 years, was it too soon to be promoted?

“I got tapped by a brown belt the night before” – the guy was good and just because I got tapped doesn’t mean anything just I got caught in something and couldn’t get out.

“As soon as I got my black belt I then got tapped by a black belt” – I can’t believe now I seriously thought this. The guy was a very good black belt already and I had been a black belt about 5 minutes. Just because I got promoted to black belt doesn’t mean I am any better than I was 5 minutes ago as a brown belt!! You have to understand that the belt is totally insignificant at this point, a certain belt does not bring magic powers.

“I’m feeling more pressure than I was before” – Good, that shows that you are taking Jiu Jitsu seriously, nobody wants a belt that doesn’t fit. You just have to work through it and not let it affect you. Thursday I was a brown belt, Friday I was a black belt, a lot more pressure but little improvement if any, it’s only 1 day difference.

No matter what belt you are it is still ok to tap. Higher grades will sometimes tap to lower grades just not too often. If a higher grade taps to a lower grade then great, it means you were trying something and it didn’t work and you got caught. If it happened every session then it would a problem but sometimes you will get caught.

If you are a new blue and get tapped by a white belt, no big deal, just get on with it. Please do not let it affect you to the point you end up quitting. I have seen it so many times and believe the highest mortality rate is BJJ is at blue belt. It is your first taste of pressure, some handle it, some don’t. Stay the course.

Every grade has it’s own trials and tribulations, even the black belts feel pressure, possibly even more than the other belts but remember always, a black belt is just a white belt that didn’t quit.

Trust your coaches judgement, if they say you are a particular grade then that’s it, you are. We do this all the time so we know!

One of my old ‘Traditional’ Jiu Jitsu coaches would say “Would you pass your driving test then argue with the examiner that you aren’t ready to drive?”

One of my old training partners Varqa was training his butt off, competing and improving at such an alarming rate I was going to charge him double to train.

Although he hadn’t been a blue belt that long I recognised that he needed to go to purple to continue challenging him so we went over to Manchester when SBGi head honcho Matt Thornton was there who was doing our belt promotions at the time. He saw Varqa and awarded him a straight purple. I hadn’t told Varqa he was going to get graded otherwise he would have been horrified and wouldn’t have gone.

So a few days later I am explaining to him that he deserves to be at that level and when he mentally catches up with his physicality he would make even more massive improvements. I then told him I had organised a purple belt super-fight for him against Gracie Barra Newcastle head instructor Dave Eliot actually in Newcastle so I could prove to him that he was indeed a purple belt and could handle fighting a local hero in his home town. Dave was a really good competitor, tough as nails and really skilled too.

I started training harder with Varqa knowing Dave would attack him constantly with arm bars and triangles from guard so I replicated that over and over. Varqa got so good in that dynamic that the last time I rolled with him prior to the match it took me 45 minutes to triangle him and still remains to this day one of my favourite rolls. One of those times where we are both in the zone and time doesn’t exist.

Fast forward to Newcastle and the superfight, Dave pulled guard and attacked just the way we practiced, Varqa remained calm, remembered the drills and stayed safe starting to work to pass guard. As they were looking to go out of bounds the ref stopped them, brought them back into the middle and let Dave have a full triangle position for the re-start, this was a little naughty as he didn’t have that before the re-start.

If anyone disputes this, I still have the video somewhere!!

Anyway I just told Varqa to stay calm, escape and pass which he did. He settled into side control as time elapsed and he won 3-0.

What does this prove?

Whatever you may be feeling inside, your coach knows best.

What is your part in this process? Roll, experiment, tap, experiment some more, tap some more.

Just keep doing what you are doing, ignore the colour around your waist, after all that is your coach’s job so don’t worry about it.