8 Judokas to Watch For At The 2012 London Olympics 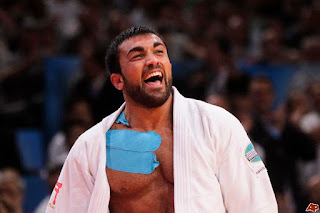 If you’re following Judo at the Olympics you can watch the matches on streaming on this link: http://www.eurovisionsports.tv/london2012/  (Just make sure to check the schedule on the same site and choose the right channel). Meanwhile here is a list of athletes to watch out for that the good people at OTM came up with. Check it out.


Source: On The Mat

1.Teddy Riner
Age: 23
Country: France
Event: Heavyweight (100+ kg | 220+ lbs)
France has the biggest and baddest man in the sport of Judo. Teddy “Bear” Riner stands 6-feet-8-inches, weighs 306-pounds, and has been absolutely dominating Judo’s most celebrated division. Riner has currently won an unprecedented 6 consecutive world titles. This includes individual world titles from 2007-2011, as well as a team title for France last year. Four years ago in Beijing, Riner won a Bronze Medal. He is the surest thing to a “lock” in the London Games to take home a Gold Medal in Judo. This division is Teddy’s world and the rest are just living in it.

2.Ilias Iliadis
Age: 25
Country: Greece
Event: Middleweight (90 kg | 198 lbs)
After winning the Gold Medal (81 kg) at the age of 17 in his home country of Greece (He a naturalized Greek of Georgian descent) in the 2004 Athens Games, Ilias Iliadis became a national hero. He was then invited to carry in the flag of Greece during the opening ceremony for the 2008 Beijing Games. Iliadis didn’t medal in Beijing, but he’s back on track to win the 90 kg weight class in London. If he does, he will become one of the few who have ever done so in two different weight classes. Interestingly, Iliadis has another Olympic gold medalist in his family. His cousin Zurab Zviadauri also won a Gold Medal at the 2004 Athens Games, but did so for the country of Georgia. Iliadis and his family moved from Georgia to Greece in the 90’s, which is the country he represents. 3.Rishod Sobirov
Age: 25
Country: Uzbekistan
Event: Extra-Lightweight (60 kg | 132 lbs)
Rishod Sobirov will be a big favorite to win a Gold Medal in London in the men’s lightest weight class for Judo. Sobirov won back-to-back world titles in 2010 and 2011 and was the world’s top judoka last year. In fact, the Uzbek accumulated nearly twice the points of his nearest rivals in his weight class (60 kg). Sobirov will look to improve upon his Bronze Medal finish in the 2008 Beijing Games.

4.Leandro Guilheiro
Age: 28 (He will turn 29 before the Olympics end)
Country: Brazil
Event: Half-Middleweight (81 kg | 178 lbs)
Leandro Guilheiro is returning to the Olympics for a third time, looking for his third medal. He won a Bronze Medal in the 2004 Athens Games and another Bronze Medal at the 2008 Beijing Games, while competing as a lightweight (-73 kg). Guilheiro will now look to bring his well-known “sparkling” Judo to London and upgrade to Gold as a half-middleweight (-81 kg) before looking ahead to 2016, when the Olympics take place in his home country of Brazil.

5.Lucie Décosse
Age: 30 (She will turn 31 before the Olympics end)
Country: France
Event: Middleweight (70 kg | 154 lbs)
Lucie Décosse is the French buzzsaw favored to win the 70 kg weight class for women’s Judo, which is the same division MMA star and Strikeforce champion Ronda Rousey won the Bronze Medal in at the 2008 Beijing Games. In those same Olympics, Décosse took home a Silver Medal in the 63 kg weight class. She will now look to upgrade to a Gold Medal, as she brings her current #1 world ranking and trademark Ōuchi Gari throw with her to London. 6.Kaori Matsumoto
Age: 24
Country: Japan
Event: Lightweight (57 kg | 125.5 lbs)
Kaori Matsumoto won a world title in her home country of Japan in 2010 and enters her first Olympic Games as a favorite to win a Gold Medal in London at 57 kg. Matsumoto should gain plenty of new fans from the sport of Brazilian Jiu-Jitsu due to her being a ground specialist. Her newaza is top-notch, so ground fighting enthusiasts will be in for a real treat when her matches play out on the mat. 7.Soraya Haddad
Age: 27
Country: Algeria
Event: Half-Lightweight (52 kg | 114.5 lbs)
Soraya Haddad won the Bronze Medal four years ago at the 2008 Beijing Games for Algeria. She is also a three-time African champion (2004, 2005 and 2008) and a bronze medalist in the 48 kg category in the 2005 World Championships in Egypt. Last year, she won the 52 kg weight class at the All-Africa Games in Mozambique. Haddad’s road to the Gold Medal in London will probably see her face reigning world champion Misato Nakamura of Japan. Nakamura won the other Bronze Medal in Beijing at age 19. Judo awards two Bronze Medals in each weight class and Haddad and Nakamura both got one at 52 kg in Beijing. Kayla Harrison won the women’s Judo world title at 78 kg in 2010. This made her the first American woman in 46 years to do this. Now she is looking to accomplish her second and final Judo goal: win an Olympic Gold Medal. If she accomplishes this final goal, she will become the first American (male or female) to win a Gold Medal in Judo at the Olympics. Her coach Jimmy Pedro won two Olympic bronze medals and she was a training partner of 2008 Beijing Games bronze medalist and current MMA star Ronda Rousey. Harrison enters the 2012 London Games primed to outdo both her coach (Pedro) and friend (Rousey) by becoming the first American Olympic champion in Judo.