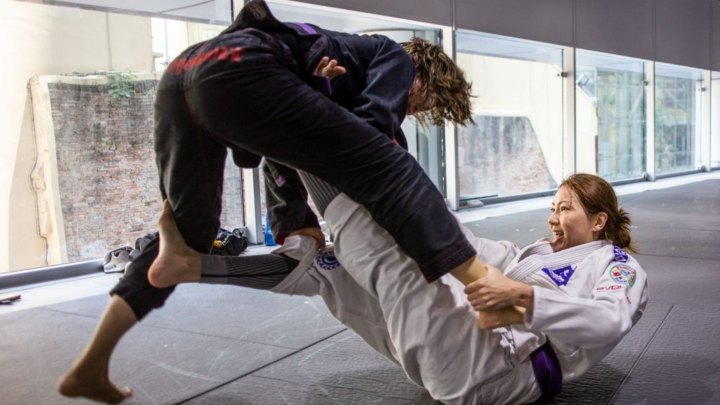 When you first start learning Brazilian Jiu-Jitsu (BJJ), learning how to consistently pass guard can be quite frustrating. Being stuck in someone’s guard is rarely fun. They have more options offensively and defensively, plus constantly fighting off their attacks and sweeps can be tiring.

There are some fundamental things that most who are new to BJJ struggle with when it comes to passing the guard. Once you have all these things down, you will have a significantly easier time opening up your opponent’s guard.

The term “can opener” says it all. This is a technique that some beginners gravitate to and it can be used to force an unskilled opponent to open up his guard. That’s the issue with it. You might get away with it when rolling with other newbies, but you will run into serious trouble when you roll with someone who knows what he is doing.

The can opener could also be called the “arm bringer” since you are serving up your arms to your opponent on a silver platter. A good guard player would simply use the opportunity to lock up an armbar or a sweep.

Be careful when trying to power your way through someone’s guard. It often makes you more vulnerable than you realize.

2) Going for submissions while stuck in closed guard

Here is another one of those things every BJJ newbie does a few times. You barely know how submissions work so you might decide to go for a submission like a kimura from top guard. The problem is, the person on the bottom has all the leverage in that position. For him/her, going for a kimura is a good idea. For the person on top, the odds of the other person tapping from it are virtually none existent, and there’s a very good chance the person on top ends up getting swept or countered with an armbar.

The same occurs if you attempt a cross-collar choke in someone’s guard. You are simply giving them your arms to do with as they please. It makes more strategic sense to pass the guard first then look for a submission from side control or mount.

3) Leaving one of your hands inside your opponent’s guard

Other newbies might let you get away with such poor technique, but more advanced students will make you pay – especially if the triangle choke is one of their specialties. It is actually impossible for someone to secure a triangle choke on you if you do not have only one hand inside his guard. Stay aware of where your arms are at all times and you will find yourself getting caught in triangle chokes a lot less.

One of the most common reasons why people end up with only one arm in an opponent’s guard is when they go for a stack pass. Keep your movement of both hands simultaneous when using such techniques.

Many people instinctively feel more vulnerable when both of their arms are inside someone’s guard, but it is a very safe position for the person on top. Do not panic when one of your arms is stuck in someone’s guard, simply put your second arm inside as well.

4) Too much forward pressure

While you might be able to pass a newbie’s guard with forward pressure, that is not going to work on anyone who knows what they are doing. Pushing forward actually makes it easier for the person on the bottom to sweep their opponent and reverse the position.

You want to open the person’s guard and advance forward, but it needs to be done with technique. Remember that the act of passing any position actually opens you up to attacks and sweeps.

Avoid mindlessly pushing forward to prevent your opponent from using your momentum against you.

5) Not maintaining a solid base and posture

One of the most important aspects of BJJ is your base and posture. A good base keeps you solidly planted on the mat, making it harder for your opponent to sweep or get away from you. Solid posture prevents your opponent from going for certain submissions while opening some up for you.

Always be aware of your posture and base regardless of the position you find yourself.

When in the closed guard, the first thing you want to do is establish a solid base and proper posture. This is the foundation that most guard passes are built upon. If your base and posture are good, your opponent will have a hard time imposing his will on you. At the same time, it puts you in the perfect position to start your pass.

Maintain a solid base and posture after you pass the guard. You don’t want all that hard work to be for nothing, do you?

6) Failing to climb the ladder

Think of guard passes in BJJ as climbing a ladder. To safely get to the top of the ladder, you need to methodically move up the rungs. Skipping a rung can result in a fall, forcing you to start from the beginning all over again.

You won’t become good at passing guard until you make it a habit to perform each step of all the guard passes that you use. Fail to use the proper grip when breaking a person’s guard open and you might have to start all over again.