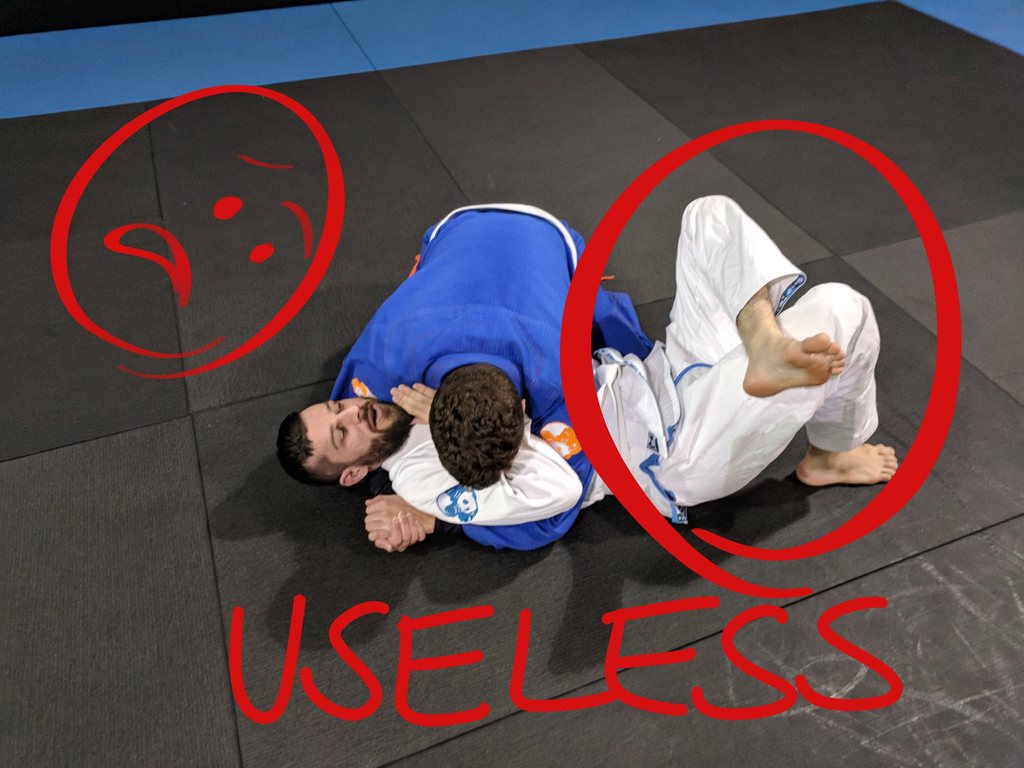 „We first make our habits, and then our habits make us“, said the great English poet John Dryden. It’s the habits that will make or break you as you go through life – Jiu Jitsu included.
And it’s not just about adding good ones to your repertoire… It’s also about neutralizing the bad ones from ever influencing your BJJ too much.

Here are the 5 bad Jiu Jitsu habits that you absolutely HAVE TO avoid!

THE MOST FREQUENT OF BAD HABITS: DRILLING ONLY ON ONE SIDE

Anyone that says that they’d rather drill moves on their „weak“ side than on their „strong“ side probably isn’t completely honest with you. It’s so much easier to just do it on your strong one!
However, this can then easily turn into a habit of one-sided drilling. And if you want your BJJ to be on the most magnificent of levels, then you have to avoid it!

Just force yourself to practice every single drill on both sides. Just do it! Practicing on both sides will turn you into a well-rounded athlete that can use his techniques whenever he wants to.

BAD HABIT #2: BEING PASSIVE WHEN YOUR TRAINING PARTNER DRILLS

The mistake many Jiujiteiros fall into is that while their training partner is drilling a technique, they just lay there and do nothing.

Now, you really shouldn’t do anything. At least not more than that which would incapacitate your training partner from effective practice. But being passive isn’t to be associated only with „doing“ – it also means that you’re not thinking!
If you aren’t thinking of ways that your training partner could improve their technique and how you would defend against it, you’re losing big time.

So, the next time your partner drills a move, think and visualize that which would help your technique.

BAD HABIT #3: GOING INTO A ROLL WITHOUT A PLAN

Yet another one of nasty habits that a LOT of BJJ athletes have is that they roll without a goal in mind. Their ultimate objective is to slap, bump, spar – and that’s it.
This is a very bad approach, as it guarantees that you won’t learn anything new!

Instead, make it a point to always have a plan for what you want to work on before the roll. Determine which technique(s) you want to improve in, and then go for them. This will make sure that you’re actively improving in the things you want to become better at.

BAD HABIT #4: NOT TRYING THE TECHNIQUES SHOWN IN CLASS

Be upfront with us: how many times were you shown a technique in class, only to have never actually tried it during the rolling session? It’s far too frequently the case that Jiujiteiros just go for their „usual stuff“ when they spar – without trying out the new moves, shown just a few minutes ago by their coaches.

If you want to learn new techniques, you have to put them to the test when you roll. Don’t let them evaporate into thin air after all of the hard work from your coach.

BAD HABIT #5: NOT THINKING ABOUT WHAT YOU’VE LEARNED OUTSIDE OF TRAINING

Lastly, if you confine BJJ only to the time you spend training it, you’re not going to make nearly as much progress as you could… If you were to think about what you learned while away from the mats as well.

When you get home, write down some notes on the techniques you went through. Visualize them. Look up ways to make them more efficient on Youtube.
Do anything that you can to improve – and your grappling will be more than grateful for it.