4 Tips For The New BJJ Purple Belt: This Is How To Keep Improving 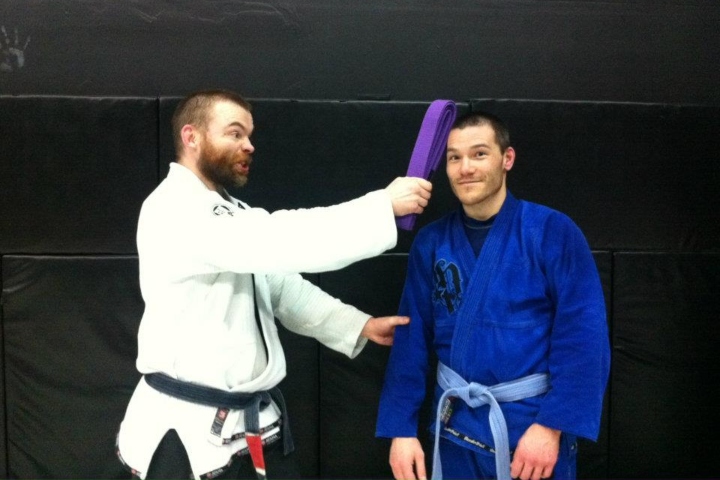 So you’re a freshly-minted BJJ purple belt, congratulations! It’s a fantastic achievement and you’re now one of the most dangerous people on the mats. That deserves a ton of respect, plus given how far you’ve come so far – you’re almost certain to become a black belt in the future.
However, you still need to keep your eyes on the prize. You still have to keep improving; which, as a BJJ purple belt, can often be difficult to do.

Here are 4 tips that will help your progress.

Tip #1: change how you roll. It’s now time to start dialing in on a few moves, becoming really good at them. It’s time to move away from being focused on a lot of different techniques; you’ll progress far faster this way.
But also, let people get into advantageous positions, so that you can work on your defense. There’s no more room for ego at purple belt, if you want to reach the brown belt rank.

Tip #2: understand the “why”. Why did a technique work? Why did your submission work this time and didn’t the other, and what makes the Mount escape that your coach just showed so effective?
As a BJJ purple belt, you need to start asking “why” things work in Jiu-Jitsu. By doing so, you’ll start to acquire an in-depth understanding of the Gentle Art.

Tip #3: embrace your weaknesses. If you can’t pass Spider Guard, it’s time to find every guy in the gym that plays Spider Guard and force yourself to start passing it. If your Side Control escapes are weak, yes; you need to spend more time in bottom Side Control, practicing escapes.
When you become a BJJ purple belt, it’s your obligation towards yourself to stop neglecting these areas. You need to become better at them.

Tip #4: you are a role model. The white belts and blue belts are going to be looking up to what you’re doing. They’ll want to learn from you – so don’t disappoint them.
Show up on warm-ups, be focused during training and do things as they were shown, stretch after class as well. Show them what discipline and progress in BJJ are all about.