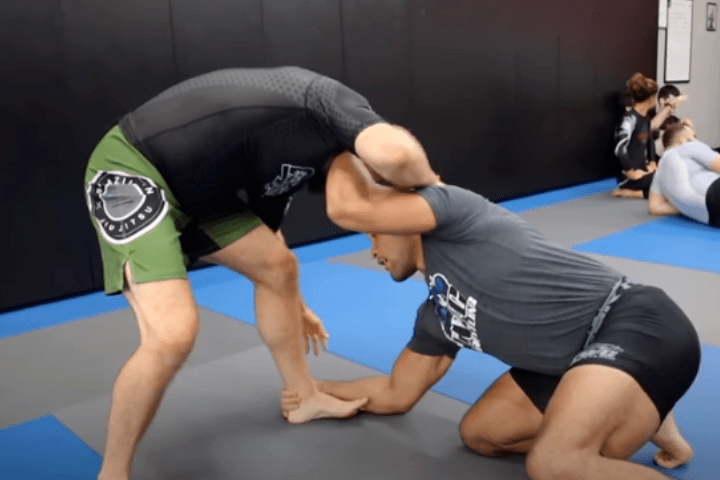 Learning how to do takedowns in Jiu-Jitsu can sometimes be confusing. There are so many different options to choose from and so many different variations… That it’s easy to get “lost” in all of that takedown mess!
But here’s a really simple option that you can start practicing right now in your No Gi classes. It’s a neat variation of the Ankle Pick takedown.

GETTING THAT ANKLE PICK

The starting point of this Ankle Pick setup is from when you and your opponent are tied up in a standing position, with them grabbing your triceps. Now, instead of trying to position your forehead to the inside of their head (as you’d usually aim to do in standup), Brandon emphasizes that you’ll keep it at the same level as the opponent’s forehead.
From there, you’re going to move the opponent’s head to the side that’s opposite to where their head is pointing.

Keep moving once in this position – and as soon as you see them making that big step forward, it’s go time! Drop down to your knee and then drop down your elbow as well. Keep pulling their head all the way through, don’t let it get loose.
Grab and pick up their ankle, while push their head… And you have your takedown! Move into Side Control as fast as possible to consolidate your position and make your attack.

Check out Brandon demonstrating this technique on the video below: