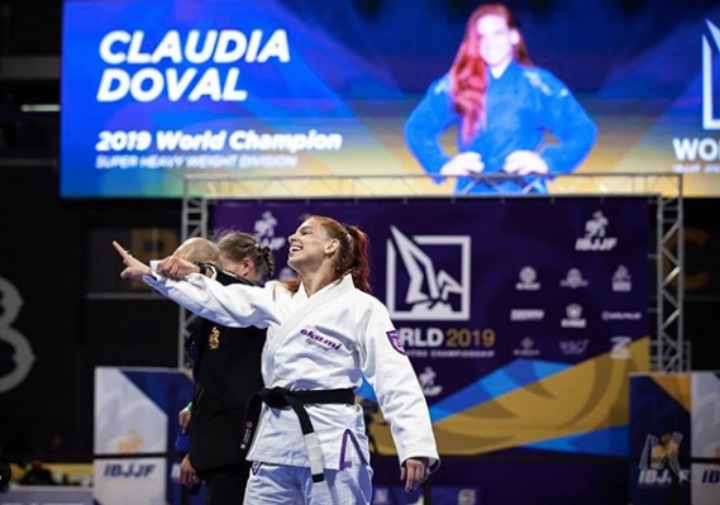 Claudia Doval is a name that has quite recently popped out on the BJJ scene. She is a black belt part of Soul Fighters team, and by being named as the top female athlete by the IBJJF for the 2018/2019 season – and by winning gold for the third time on the World Championships this year – she is a force to be reckoned with and is one of the top jiujiteiros of her generation.

She has joyfully shared some of her insights with us. Enjoy reading about them!

BJJEE: Thank you, Claudia, for being a part of this interview. For starters, we’d like to know – how has the 2019 been serving you? Are you satisfied with your overall progress in BJJ?

Claudia: So my 2019 didn’t start so well, with me taking second place in Europeans and Brazilian nationals, and by not participating in Pan Ams. I could say that I’ve had a bad performance. But, truly, when I look at it, I’m very proud of my achievements this year. Even though I wasn’t winning, I feel I did well, especially because I have started training jiu jitsu later in life and, also, because I’ve had a severe shoulder injury. So, getting the second place at a major tournament is a really good achievement. Plus, I managed to win Worlds again in 2019, so I’m quite happy.

BJJEE: Your love towards grappling is obvious; prior to BJJ, your first love has been judo. What made you fall in love with judo? And what made you transition afterwards to jiu jitsu – what made you stay with and continue training BJJ?

Claudia: I loved the sport, it was fun and challenging. Also, it made such a difference in my life – I lost a bunch of weight, I was happier with myself, I made friends. But then, in BJJ, I had all of those things on a bigger scale, making more friends and feeling at home in the gym.

I stayed because I liked it so much. Like I said, it made wonders for my self esteem and for my body, so I appreciated the exercise. Also, I could see my progress and I liked that. Because of my friends as well.

BJJEE: Now, there’s another very interesting side to you. Up until you earned your brown belt, your approach to BJJ was mostly based on a hobbyist perspective – is that fair to say?

And then, in 2015 and after multiple wins at the World Championships, the European Open, and the Rio Winter Open – and after being awarded the black belt by your coach, Ricardo De La Riva – that changed and you took on the competitive mindset. That led, among other things, to you being recognized as the top ranking female athlete in the 2018/2019 season by IBJJF!

BJJEE: Could you tell us more on why, at first, you decided not to make BJJ something to focus on professionally, as well as how the transition to the competitive landscape felt like?
Also, how did it feel being recognized as the one on the first place?

Claudia: Yeah, I competed three times when I was a white belt and once when I was a blue belt; and then started competing again at the brown belt, going to the big tournaments.

I used to do judo before jiu jitsu and I competed a few times in it. I never liked the feeling I had – I was always very nervous. Nothing changed, by the way (laughs). And I didn’t like that, that’s why it took me so long to get back to competition. But, I had a lot of incentive from my friends, so I decided to try and compete again. And then I started doing really well and realized I could do it!

And, well, the ranking doesn’t mean that I’m better than anyone. It just means I have more points, because I’ve been to every single tournament i could go to.

BJJEE: Among those lines, what advice would you give to the athletes that just started their BJJ journeys?

Claudia: Well, for everyone just starting, I would advise patience, because you’re not going to be able to do everything at first. Start small, learn the basics and keep progressing from there.
Don’t be in a hurry to get promoted, but try to value knowledge more than belts. And mostly: have fun.

BJJEE: Thank you for making the time for this interview, Claudia. Would you like to add anything else before we conclude?

Claudia: To finalize, I’d just like to mention my new gi sponsor – they’re awesome! Find them on Instagram at @okami_fightgear.