3 Ways To Use The Kimura Grip In BJJ 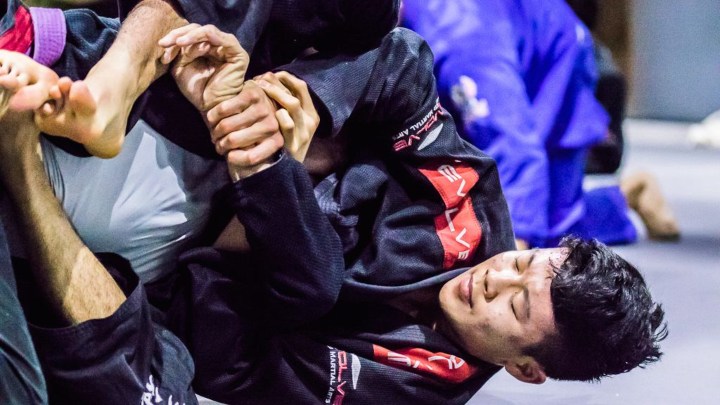 The Kimura grip is by far the most versatile grip in Brazilian Jiu-Jitsu (BJJ), whether grappling with or without the gi. While it is mostly known for its application as a powerful submission hold, to view the Kimura as only useful for submitting would be a big mistake as it has several other useful applications. The key to mastering the Kimura is to view it as a grip that can be used for a variety of means, including taking the back, passing the guard, and even throwing your opponent!

One method of guard passing that is becoming incredibly popular in modern grappling is to use submissions, or the threat of a submission to pass the guard. One of the most common responses from a practitioner who is about to have his guard passed is to extend his limbs to start pushing his opponent away, which creates the perfect opportunity to latch onto an exposed arm, leg or neck. The Kimura is exceptionally useful in this context as it can be used when your opponent’s arm is extended while attempting to push you away, or while it is bent and attempting to grab you.

The most common place where the Kimura will appear in a guard passing scenario is when you are passing your opponent’s half guard with a Base Switch pass. A Base Switch pass is when you turn your torso to face your opponent’s legs and sit on your hip. This allows you to use your hands to break your leg free of the half guard. The most common pass is to use your hands to clear the opponent’s legs off of your knee, and then subsequently drive that knee to the mat, placing you in three quarters mount. While attempting to drive your knee to the mat, your opponent is likely to reach his arm down to post on your knee. This creates the perfect opportunity to lock up the Kimura.

While you can absolutely use the Kimura grip you have achieved as a submission hold, it is more realistic to use it to pass the guard. In order to do this, drive the Kimura to the floor as if you are attempting to finish. Your opponent will be forced to unlock his half guard in order to use his leg to break your grip. As soon as he unlocks his legs, step your trapped leg up and out of his half guard, placing you in side control and past his guard.

One common theme in all forms of Submission Grappling, whether it be gi or no-gi BJJ or MMA, is the supremacy of strangulation submissions over joint lock submissions. While there are some very tough opponents who will refuse to tap to arm and leg locks, whether they choose to tap or not tap to strangles is irrelevant. If the submission is executed properly they will go to sleep if they don’t tap. For this very reason, we have seen the Kimura lock be used as a mechanism to take the back where strangles such as the Rear Naked Choke and the Back Triangle are readily available.

For example, if you have just used the Kimura grip to pass your opponent’s half guard as detailed above and you don’t believe your opponent will submit to the joint lock, you might want to use the Kimura to take the back where you can pursue a strangle. From side control, use the grip to pull the opponent up onto his side. Then walk around his head all the way until you are on the opposite side of where you started. You should now still have the grip locked in on his top arm and you are both facing the same direction. Quickly pop up to your feet, keeping the grip tight to your chest. From here sit to your back as you pull your opponent on top of you and throw your hooks in.

While using the Kimura grip to pass the guard and take the back are both very effective techniques, the most exciting and flashy move on our list is to use the Kimura as a counter throw, particularly against the Single Leg Takedown. If your opponent has you in a Single Leg Takedown position, the first step is to push his head down and place your chest on top of it. If he is attacking your left leg, grab his left wrist with your right hand. Then thread your left arm behind his left elbow to lock up the Kimura.

In order to throw your opponent with the Kimura, the key is to use the leg that your opponent has trapped in the Single Leg as a butterfly hook. Take your free leg and step it between your opponent’s legs as you sit underneath him. While keeping your Kimura grip locked in place use your leg as an elevator, rolling him over you. Make sure you roll back on top of him so that you can take top position and finish with the Kimura lock!

While the Kimura can be used as a powerful submission hold, it should be viewed as a dominant grip as well. Understanding all of its potential uses is key to mastering the Kimura grip, so make sure you practice each of its applications thoroughly.