3 Attacks From The Front Headlock In BJJ 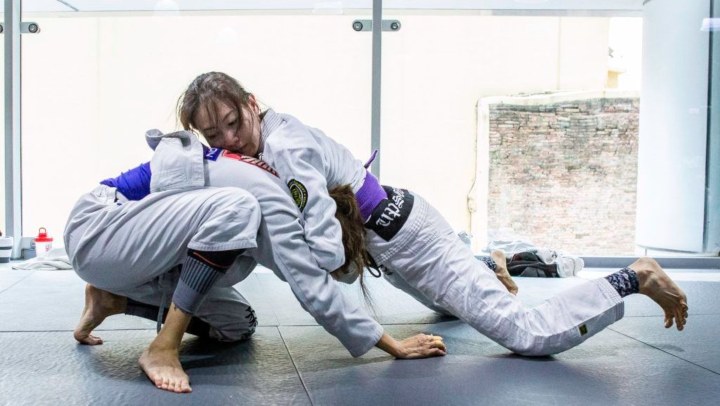 While it has experienced a recent uptick in its popularity, the front headlock is perhaps the most under-appreciated position in all of Brazilian Jiu-Jitsu and Submission Grappling. Although the position’s origins can be found in wrestling, due to the fact that the front headlock allows easy access to the opponent’s neck for strangles, it is quite useful for BJJ.

The first step to control the front headlock properly is to grab your opponent’s chin with one of your hands while your same side shoulder rests on the base of their neck. Your other hand should then grab their elbow (on the same side as that hand) and attempt to pull it towards you. Your goal is to pull the opponent’s elbow away from their body, creating a space between their knee and elbow. While it is not always necessary, a good piece of advice for beginners is to take your knees off the mat as this will keep your weight on your opponent’s neck. Now we can begin with our attacks.

Due to the nature of the front headlock position, the Guillotine Choke is the most popular, and some would say the most effective submission to come from this position. Due to the ever-increasing popularity of Mixed Martial Arts, even a Brazilian Jiu-Jitsu neophyte will be familiar with the Guillotine Choke. While the Guillotine Choke used to be considered an unsophisticated move used only by big strong guys, modern BJJ has disproved this notion as it has become the preferred weapon of many smaller, more technical grapplers like Marcelo Garcia and Jeff Glover. The “unsophisticated” stereotype undoubtedly originated from the intrinsic simplicity of the Guillotine, as all the attacker has to do is grab the neck and squeeze. While it is possible to submit opponents this way, the Guillotine Choke and all its variations are highly technical maneuvers that require excessive practice if you wish to become skilled in them.

In order to attack the Guillotine Choke from the Front headlock, the first thing you will have to do is release the grip you have on your opponent’s elbow and clasp your own wrist that is cupping your opponent’s chin. Then squeeze both of your elbows to your body as you place your shoulder on the back of your opponent’s neck, taking the excess space out of the choke. Next, slide the shin of the leg that is on the same side as your choking arm across your opponent’s belly as the other leg is thrown over their back. The leg that is across the belly is responsible for preventing the opponent from stacking you, while your other leg will stop them from rolling out of the strangle. From here, pull both of your wrists up as you use your shoulder to keep their head down, forcing them to tap. Make sure you practice slowly, as this maneuver can be quite painful on your training partners.

2) Go Behind to the Back

As the front headlock position forces our opponent to have their back facing the ceiling, it is no surprise that we will be looking to take advantage of this and take their back. The first step to taking the back is to execute a Go Behind. As mentioned previously, once you establish a front headlock you should be using one of your hands to pull the opponent’s elbow away from their knee. Once you have successfully opened that space, you can use both of your arms to pull your opponent forward as you spin behind them, putting your knee in the hole you created between their knee and elbow. You should now be facing the same direction as them. This maneuver is known as a Go Behind.

From this position, you can start looking for strangles and armlocks, but we are going to be looking to take the back. If you are on the right side of your opponent, take your right arm and thread it between your opponent’s neck and shoulder, while your left arm goes under their left armpit, locking your hands together. This is known as an over-under. Now, switch your right knee out for your left knee, making sure to keep the “hole” between your opponent’s elbow and knee open. You should now be facing perpendicular to them.

The final step is to briefly rise to your feet as you pull up, lifting them up to create space underneath them. You can now insert your back hooks and fall to your side. You know have your opponent’s back and can start to attack from there!

While our first two attacks are incredibly effective, sometimes you will feel that you need to establish a top position on your opponent. If you would like to take Side Control of Mount, that is when we would use the Turn Over.

If you have your right arm around your opponent’s chin, then the first step to executing a Turn Over is to move to your left so that you are perpendicular to your opponent. Your left hand, which was grabbing your opponent’s right elbow should slide under their body and grab their left elbow. Now your right hand should grab their left elbow as well so that both of your hands are on their left elbow with one arm above their arms and one arm below them. From here, simply pull your hands towards you as you drive forward, dropping your opponent to their side. From here you can move to your preferred top control, whether that is Side Control, Knee on Belly, or Mount. This move is not too dissimilar from the cow catcher seen in the video above.