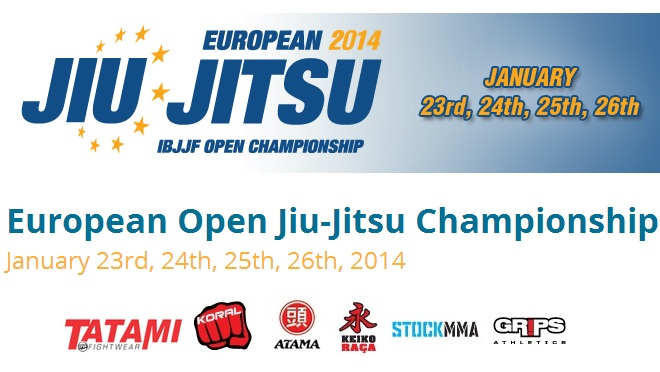 From the 23rd to the 26th of January at the Casal Vistoso municipal sports complex, in Lisbon, Portugal, the Europeans will kick off the 2014 Ibjjf season.

What might happen: Bruno Malfacine is missing here. He’s the only one with a real chance to beat Caio Terra. We should see a final between Caio Terra and Koji Shibamoto. Terra has been on fire for the past year and will take this easily.

Reigning Champion: Carlos Vieira Holanda (2012), Laercio Fernandes (2013)
Contenders: Jordy Peute, Rafael Freitas, Joao Miyao, Gabriel Wilcox
What might happen: It looks some of the regular rooster weights have gone up a weight class to avoid Caio Terra. The bracket is missing big names such as Gui Mendes, Bruno Malfacine, Laercio Fernandes, Samir Chantre. Joao Miyao sticks out here and he’s in great competition form at the moment as he won the WPJJC Sao Paulo trials last weekend. Watch for Joao Miyao to meet Rafael Barata Freitas in the final, and Joao Miyao to take the gold.

Reigning Champion: Bruno Frazatto (2012), Rubens Cobrinha (2013)
Contenders: Rafael Mendes, Gianni Grippo, Samir Chantre, Paulo Miyao, Gabriel Marangoni.
What might happen: Cobrinha is missing here however the king Rafa Mendes is back. Looking forward to see a Rafa Mendes vs Paulo Miyao showdown in the final. Both trained together but Rafa still seems too good to beat. Rafa takes this one.

Reigning Champion:Victor Estima (2012), Claudio Calasans (2013)
Contenders: Luca Anacoreta, JT Torres, Victor Silverio,  Claudio Calasans.
What might happen: Last year’s champion, Calasans is here. Anacoreta and Silverio are two new black belts that could surprise a few experienced guys here. However the final looks like it could be between Jt Torres and Claudio Calasans. The much bigger Calasans will take over JT in the end.

Reigning Champion: Alexander Trans (2012) Alexandre Trans (2013)
Contenders: Bruno Matias, Alexander Trans, Bruno Matias, Ricardo Evangelista, Rodrigo Cavaca.
What might happen: Last year Alexander Trans took the gold once again. Could he make it a threepeat? He has been training hard in the UAE. Expect to see Trans advance to the semi final and meeting Cavaca there. Trans is hard to beat on his home turf in Europe. He will once again reign supreme.

What might happen: It’s hard to say who will take the absolute when we don’t know in advance who will participate. Anyone of these contenders can take it. Let’s wait and see.